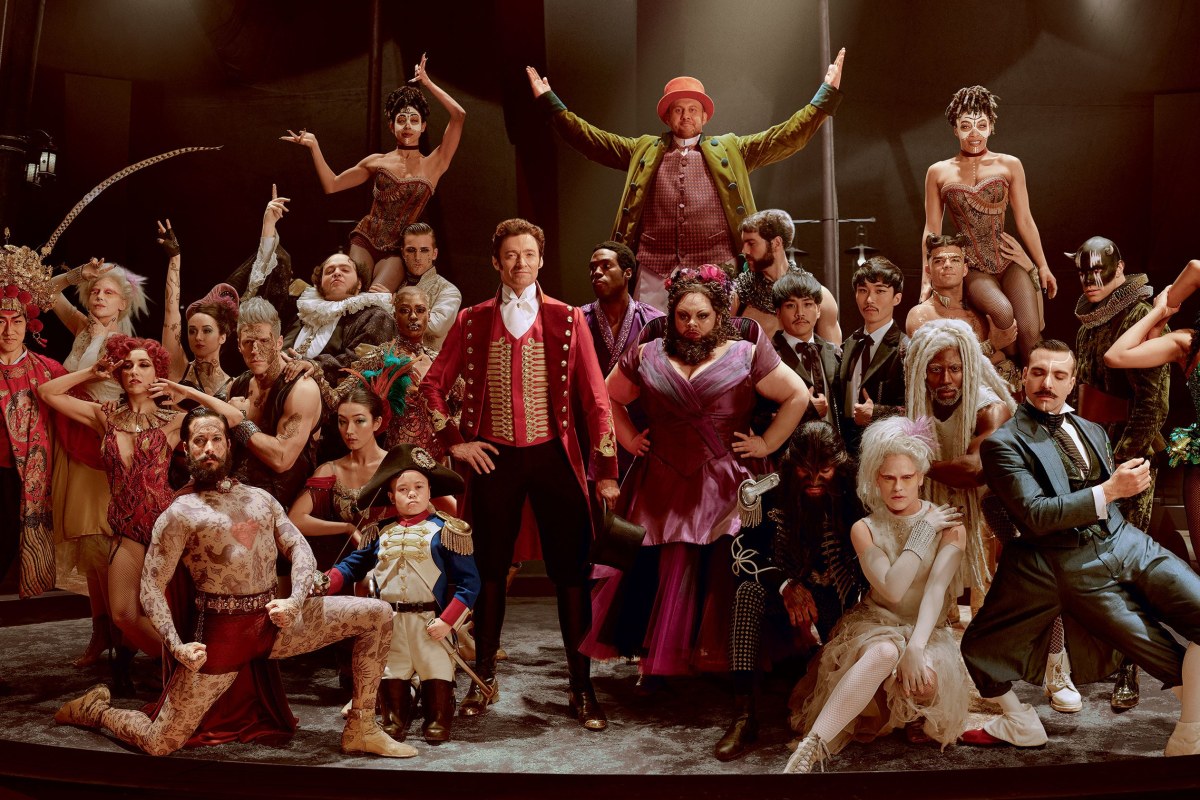 Disclaimer: I am not a professional movie critic.

I feel like I have to say this coz there are just so many pretentious ‘reviews’ out there by critics so eager to show off their powerful vocab, they’re literally tripping over themselves to stuff words like ‘iconoclast’ and ‘flimflam’ into their articles. All style, and no substance.

Loosely based on the life of P.T Barnum, the movie follows Barnum (Hugh Jackman) and his meteoric rise from poor tailor’s boy into one of America’s most well-known personalities in 19th-century showbiz. The film starts off with young Barnum and childhood sweetheart Charity (Michelle Williams), the daughter of a wealthy family. Separated by class and circumstance, they meet again as adults and get married. The young newlyweds move into a small apartment, with Barnum working as a clerk for a shipping freight company. The couple have two beautiful daughters and are content, but Barnum dreams for more.

After being laid off by the company, Barnum swindles a loan out of the bank and opens a museum, which he fills with wax figures and curiosities. Business was poor, until an idea from his daughter prompted Barnum to recruit, for lack of a better word, ‘freaks’ for his show. Attendance soared, but although Barnum now had riches, he still craved more – acceptance by high society, who still viewed him as nothing more than a circus showman.

In what must be the mother of all cliche plots, he meets Swedish opera singer Jenny Lind – and in his quest to make her the next big thing, neglects his family and the crew who helped build his empire. After failing to see that Lind was falling for him, he spurns her feelings, prompting the singer to cancel her tour and leave Barnum in debt. To make matters worse, the scandal between the two is published in a newspaper, the circus burns down, and Charity has had enough of her husband’s bullshit, taking the girls with her to her parents’ place.

Of course, he then realises that he has lost sight of who he is, and that real happiness was there in front of him all along. He picks himself up, rebuilds the circus, and everyone lived happily ever after.

The Greatest Showman is exactly like its subject matter. You enter a circus tent to be wowed for several hours by song, dance and performances. The film delivers that, and nothing more. Its attempts to convey messages of empowerment or acceptance are flimsy, and the movie misses numerous chances to expand the plot into a more meaningful one. The cast of ‘freaks’ are there to tell Barnum’s show, and glorify his existence as their saviour. At the end of the day, the audience never really finds out who they are. Who is the Dogboy? Why is the Tattooed man covered in tattoos? Even characters with more screen time, like the bearded lady Lettie, are passed off as props to telling Barnum’s ‘grand’ story. The only other story arc, that of the love story between Zac Efron’s Philip Carlyle and Zendaya’s trapeze artist Anne Wheeler, is cheesy and predictable.

That being said, the acting is solid, especially on the part of Hugh Jackman. Man is truly the greatest showman, captivating the audience in every frame, as he prances and sings his way across the stage. Performances by the rest of the cast is stellar as well, and the set is beautifully designed. The best part of the film, however, is the music and choreography. Three songs, in particular, have captivated me, and I’ve been humming them for several days lol. If you view/listen to them separate from the film, the message behind them is positive and uplifting. Here they are, in no particular order:

When Barnum’s crew gets the door slammed in their faces by the boss who was supposed to be looking out for them, they come to a realisation that to him and everyone else, they will always be ‘freaks’. Lettie the bearded lady has had enough of it and leads the group outside, bravely putting on a show despite the booing and jeering, before they finish up on stage. It’s a splendid ‘fuck you’ statement.

A powerful and emotional performance by Rebecca Ferguson, who plays Jenny Lind. She did the lip syncing so well that I didn’t realise it was a dubbed song, originally sang by Loren Allred (of The Voice fame). To me, the song embodied the protagonist, who was never satisfied with what he had, and was always craving for more. Also, the look Jackman gives her when she’s ‘singing’ is Oscar-worthy.

Typical song about star-crossed lovers – one idealistic, the other reminding him of reality. It’s very poppy and kitsch but gahddamn why is it so catchy

TGS is fun to watch, and has good songs. But is it a good movie? I wouldn’t lump it in the same category as what constitutes good movies in my book. It is a nice watch nonetheless, and keeps you entertained for the duration of the movie.

So sit back, relax and just enjoy the show.