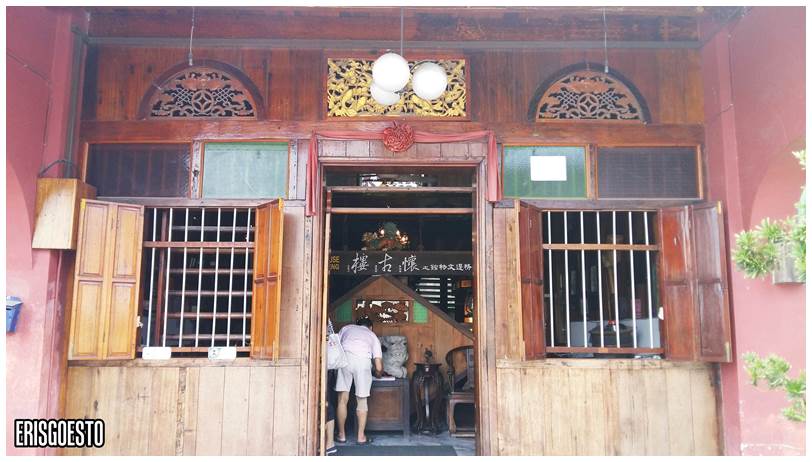 Growing up in Puchong –  a bustling city of 400,000 – I’m a city girl through and through. I never knew the hardships (nor the simple joys) that my parents experienced growing up in small towns in the 60s and 70s; when Malaysia was young and life wasn’t easy.

The fam and I recently visited the Gopeng Heritage House Museum in Gopeng, Perak – which houses antiquities, old furniture and other paraphernalia from a bygone era. It was a great experience for all of us – a walk down memory lane for Mi and Pi, and an interesting insight into the old way of life for the bro and I. Bonus: Parents acted as tour guides, since they knew all the stuff we modern kids have never seen before lol.

The old part of Gopeng (which was a tin mining town in the 1870s) has super wide roads and three or four rows of colonial British/Chinese shophouses. The museum is housed in a red building and looks well-preserved on the outside.  The family house was donated by a Mr Wong and converted into a full-fledged museum in 2009. Today, it is managed by the local community, and it’s great to see that they’re maintaining it well 🙂 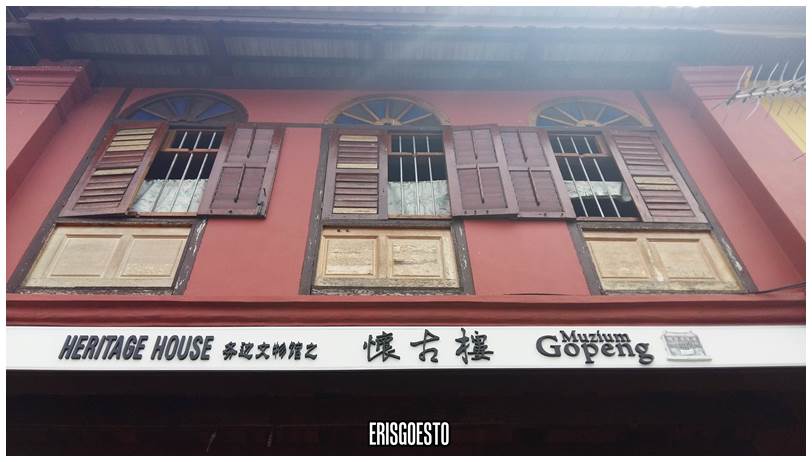 Entrance is free but do make a contribution so that they can keep on running the place ! 🙂

The house is stuffed to the brim with antiques and old furniture, recreating life for a typical middle-class Chinese family in many Malaysian towns at the turn of the 20th century, up til my parent’s era (1960s-70s). My mum used to live in a small town shophouse similar to this one until she married my dad. 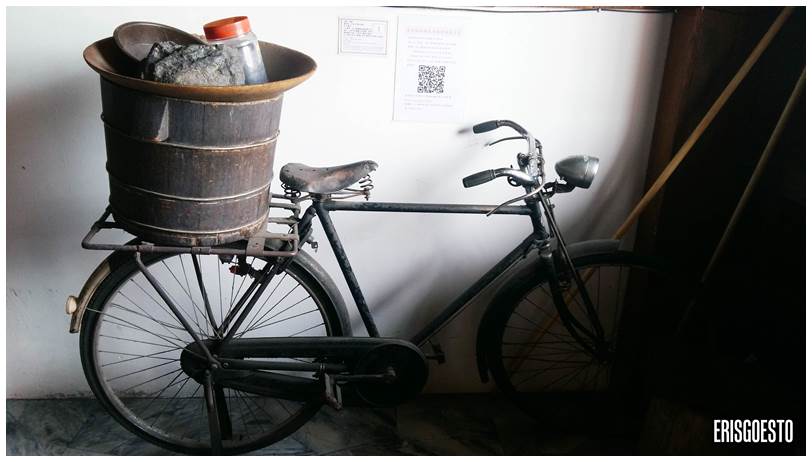 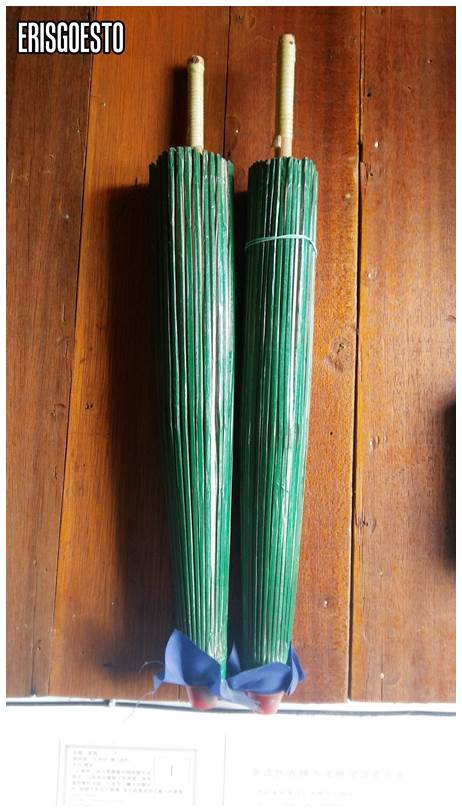 (Recreation) Before plastic umbrellas, there were wooden ones made from bamboo. Apart from providing shade, they were also used during wedding ceremonies as symbolic items. 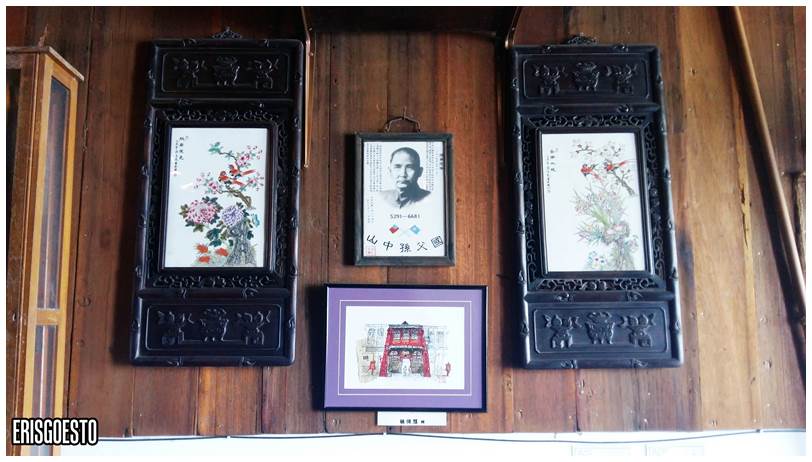 Calligraphy paintings depicting natural sceneries such as flowers and birds.

An old kapcai bike. Mi relates that she once stole my uncle’s bike to ride and crashed it into a tree. *and she says I was a naughty kid.. wonder where I got that from.

Super old phone. For each ‘number’ to dial, you had to rotate the mechanism and wait until it clicked back into place before dialing the next number. *gasp!* for the smartphone generation, this seems like an awfully ancient way to make a call. But back then you could rattle off long phone numbers by heart; now I can’t even remember what my house’s number is. 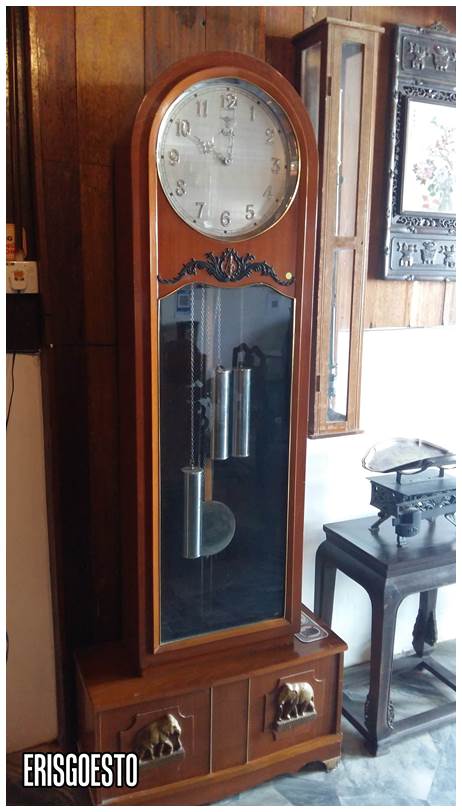 Am I the only one who finds grandfather clocks creepy? The way they chime in the middle of the night (watched too many horror films lol).

I do like the elephant detailing at the bottom though. 🙂

A bust of Chairman Mao (left). Many Chinese who came to Malaya before independence still had immense love for the Motherland. On the right is an oil lamp. We enjoy electricity at the flick of a switch now, but during my mom’s time, they had to read at night by the flickering light.

My aunt has one of these, passed down from my grandmother. Irons were heavy and super clunky, with a space at the bottom for putting hot charcoal. 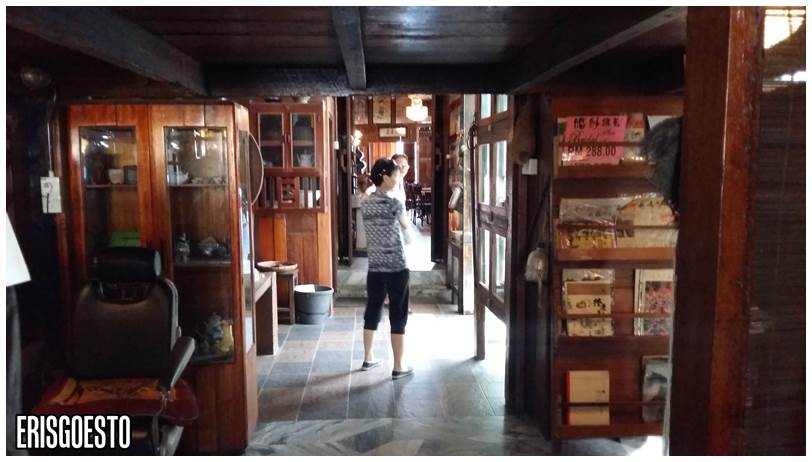 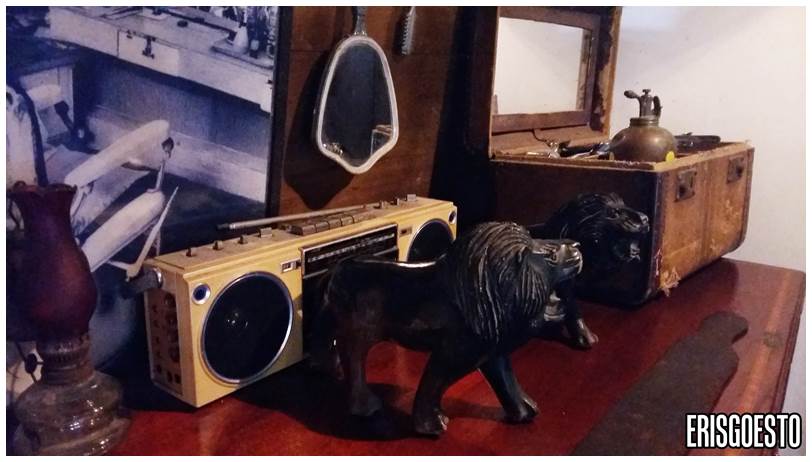 Radio. I’m not that young, so I still remember these, but ask anyone below 20 and they’ll probably think it’s some alien contraption. We had one in our house and I liked playing with the antenna thing by pulling it up and down (always got scolded by parents) and messing up the tune. You couldn’t just press it like how you do with radios these days; you have to dial it to exactly the right frequency.

There were no gas or electric stoves, so people had to use firewood for cooking.

Ais kacang was (and still is!) a popular icy cool treat. Like the Filipino halo-halo, ais kacang is a shaved ice topped with various condiments such as syrup, red beans, cendol, fruits and jelly. Now we have modern machines, but the old ones were made from heavy steel and vendors had to manually grind huge ice blocks using a round mechanism at the side. 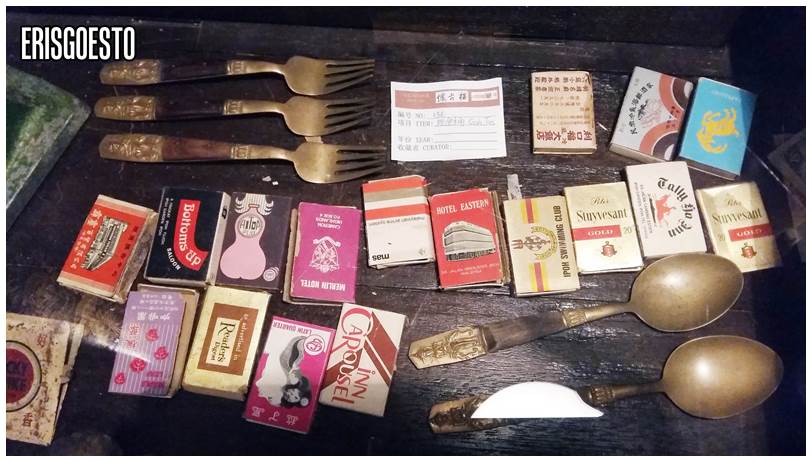 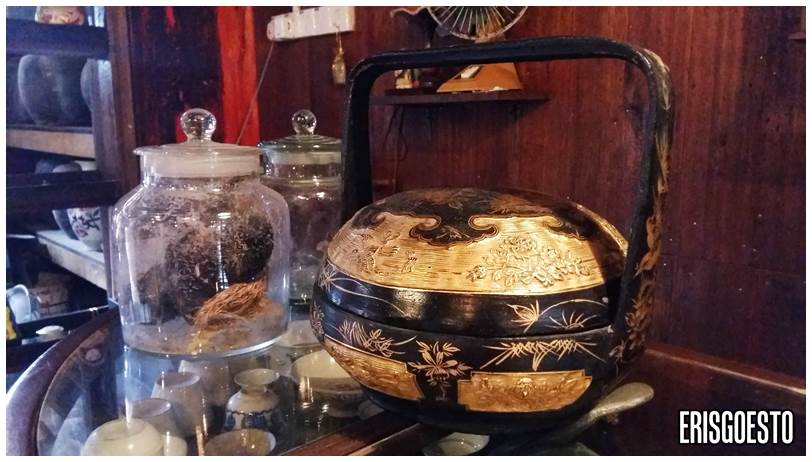 The black and gold wooden basket was used to carry food to workers out on the field or in the tin mines. Reminds me of Chinese periodical dramas.

A gramophone. I bet if you showed this to a kid now they wouldn’t be able to identify what in the holy hell it is. 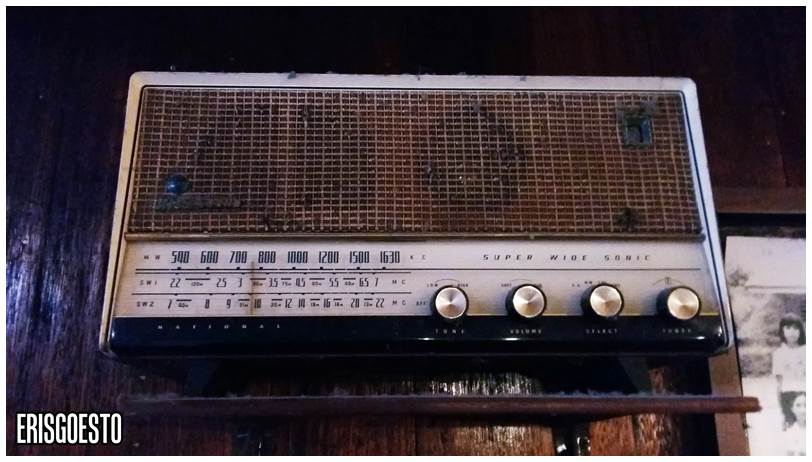 An even older radio. Might seem basic for us today, but these were only for well-to-do families back then. My mom lived in a very small town and while radios were more common, only one family had a TV set (black and white). All the neighbourhood kids would go over to watch shows, especially during festivals – so the kid with the TV would have been a big shot in town.

Did you know that in Malaysia pre-independence, you had to apply for a license in order to own a TV?

Up on the second floor, rooms have been converted to resemble proper living spaces, complete with beds, dressing tables and cupboards. Four poster beds like these were popular among middle-class families back then. My dad, who came from a not-so-well-to-do family and had many siblings, used to sleep on wooden planks fashioned like a bed, with just a piece of cloth as a ‘bedsheet’. 😥

Dressing table with washbasin on the left.

(From left to right)

More paintings, these depicting deities and scenes from ancient China.

Hallway. Building is made from wood, of course. I imagine it gets quite dark in the evening, since there aren’t many lights.

Another four poster bed with quilt covering and embroidered pillows.

Before the advent of computers and printing, there were typewriters… 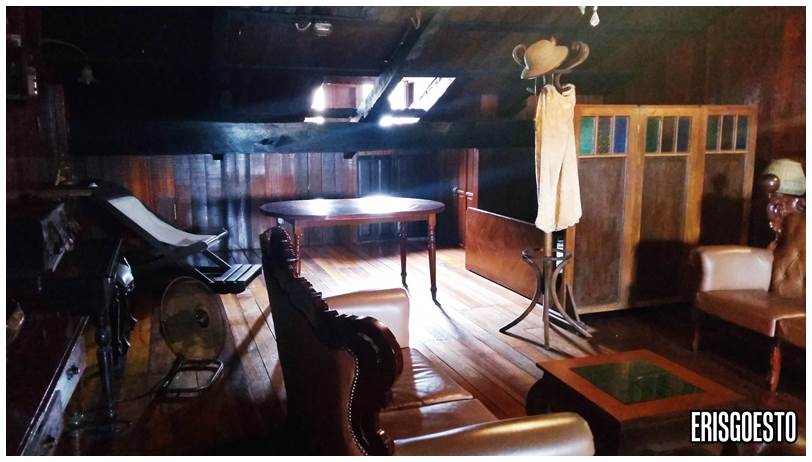 The attic, which the museum has fashioned into a more ‘European’ theme, has plush leather chairs, a coffee table and a coat/hat stand.

Ceiling lights with pretty flower motifs on them.

Whether you’re someone who loves history and culture, or just a curious cat visiting Gopeng, a visit to the Heritage Museum is a definite must while in town. For myself, it was awesome hearing the stories my parents told of their childhood and seeing how they grew up with all these items and contraptions that we youngsters no longer know or recognise. It also gives us a new found appreciation for their struggles and to always treasure all the things we take for granted today. Coz they sure didn’t come easy. 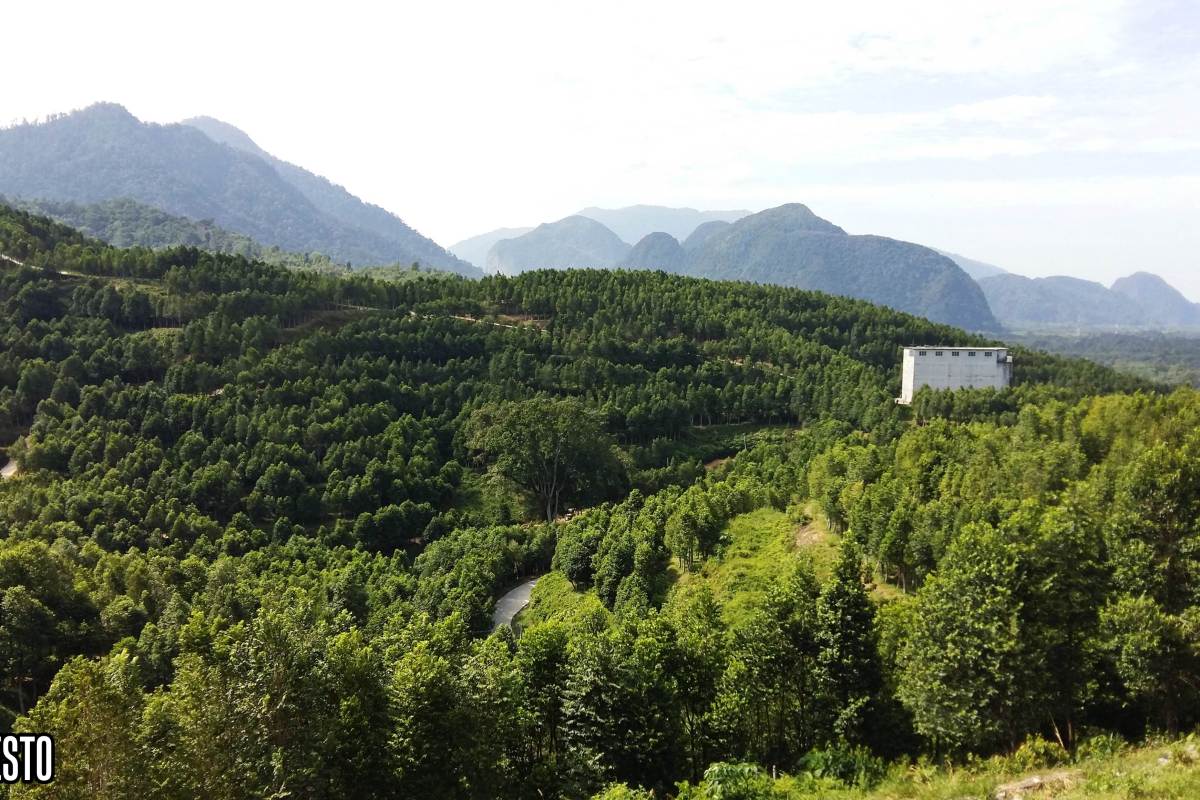 How well do you know your own country and its hidden gems?

At times I feel like I’ve already seen it all. But then I stumble across places that make me question that belief – like the Gaharu Tea Valley Agarwood plantation. I never knew this place existed, and the funny thing is, it was the supposedly less tech-savvy people (ie parents) who suggested the trip after Googling it. 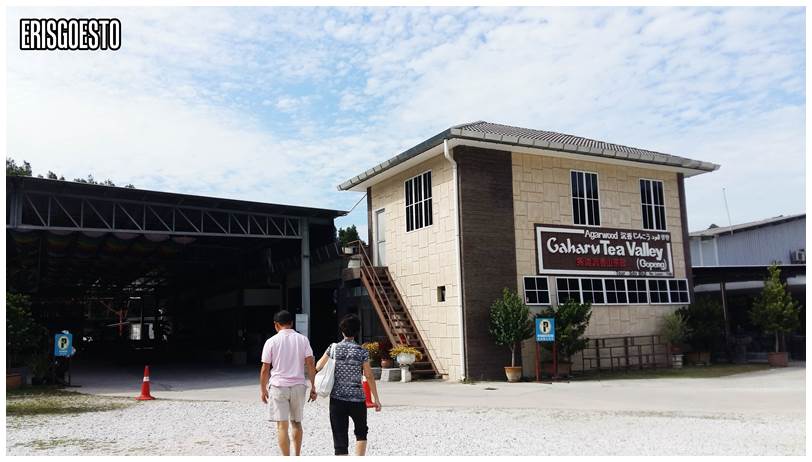 Tucked within the sleepy town of Gopeng in Perak, the Gaharu Tea Valley was started in 1992 – which means that the place has been around for more than 24 years! One wonders why they aren’t more popular as a tourist attraction among the public (they probably need more marketing!), but the place has had many celebrity guest visits, including from HK stars and local ministers/politicians. Spread across 300 acres, the plantation has over 200,000 agarwood (Gaharu) trees, which are prized for their medicinal and aesthetic properties. 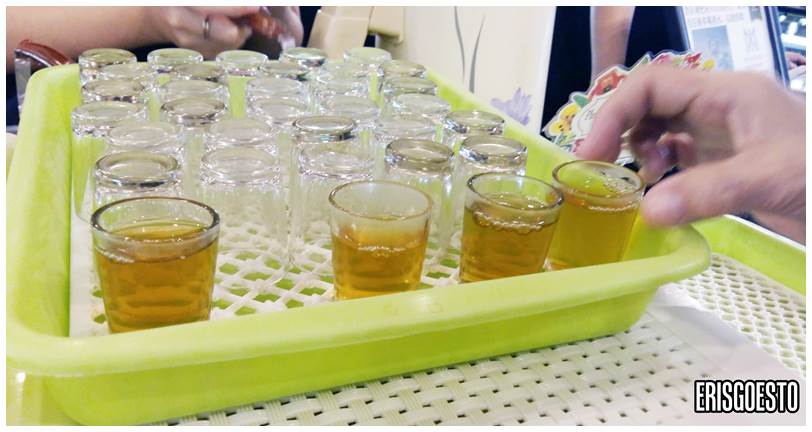 Since the plantation is huge, vans will shuttle visitors back and forth from various checkpoints. While waiting for our ride, we stopped by at the ‘base’ where they have a shop selling all sorts of Gaharu products, most notably tea. The brand is called HOGA, which is short for Holistic, Original, Genuine, Authentic tea.

Unlike conventional tea leaves, gaharu tea is made from different parts of the tree, which gives it a woody,fruity taste with herbal overtones. It’s meant to be drunk in the form it is served, without added sugar. The cold samples they provided were very refreshing and cooling on the throat – perfect for a hot summer’s day.

The tea is said to have various health benefits, such as detoxification, strengthening the kidney and liver, reducing insomnia and stabilising blood pressure. It can be pricey though (upwards of RM200+ for a medium-sized box). They also have other products like flavoured ramen and recipe sachets (bak kut teh, herbal soup).

Our comfy air conditioned van arrived and took us up to the first checkpoint – a small building/gazebo perched on top of a hill. The vantage point offered us a beautiful view of the valley below, covered in gaharu trees for miles as far as the eye can see,  with deep rolling green hills beyond the horizon. 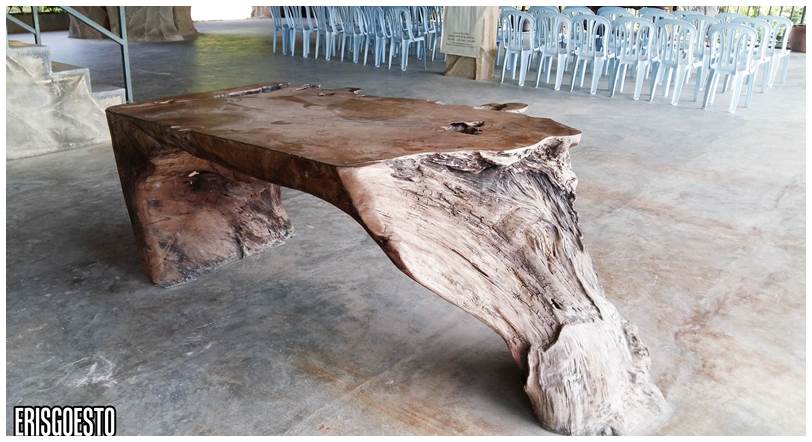 Interesting fact about gaharu trees: in its natural state, it’s just a random light and pale-coloured tree – but once it gets infected by a type of mould, it turns into a very dense, dark and resin-embedded heartwood with a distinct fragrance often used for incense and perfumes. At the plantation, according to the guides, they have to go about ‘injuring’ the trees so they can be exposed to the mould.

Moving on to the next checkpoint, we came to a small garden lined with gaharu trees, painted over with animal murals. Good for selfie enthusiasts out there. There was also a murky pond with stingrays (but we couldn’t see anything coz it was too dirty), an enclosure with a few tortoises, and a flower patch. 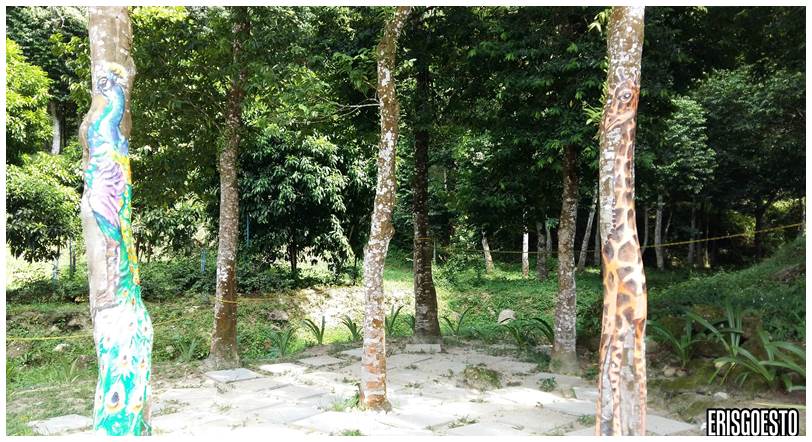 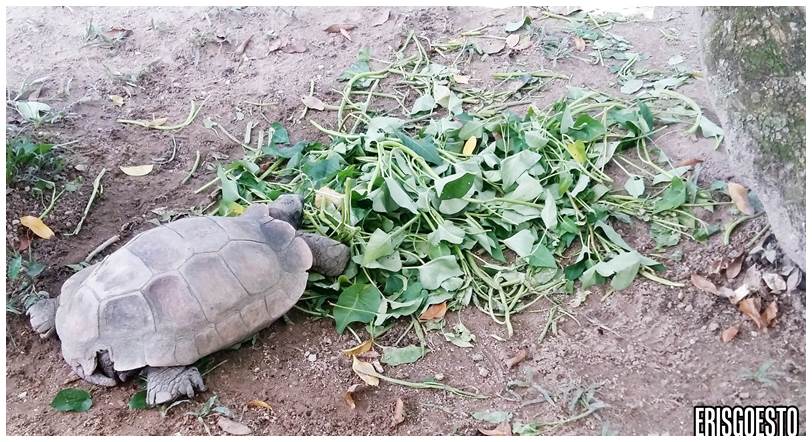 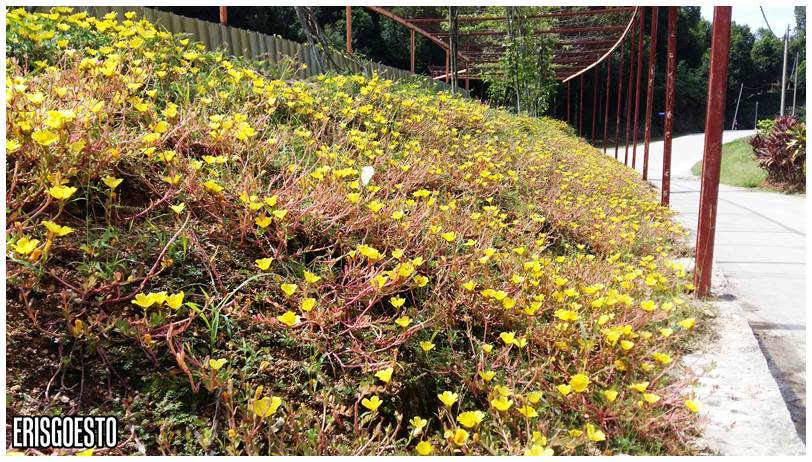 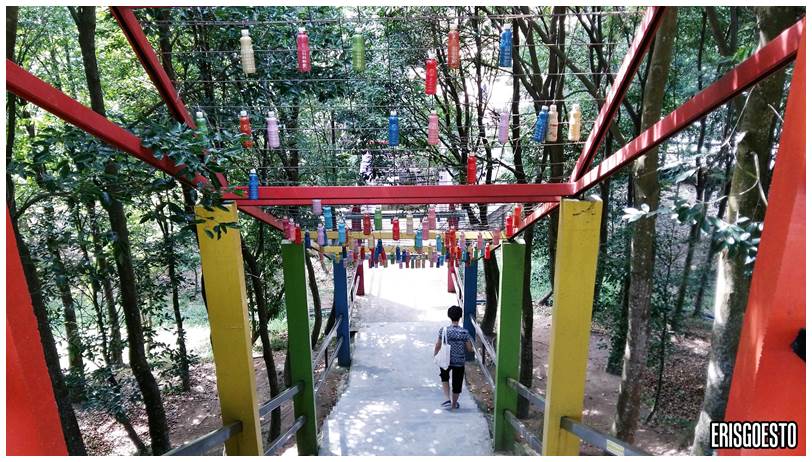 The last checkpoint is a quaint garden with a pond. To get to it, visitors pass through a staircase overhung with colourful painted bottles. Another great selfie spot! 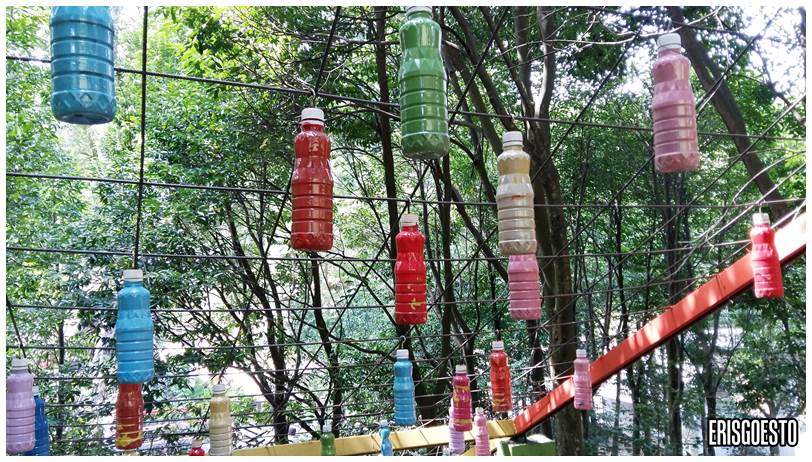 Statues of the 12 Chinese animal zodiac.

And a huge old tree in the middle of the courtyard.

Gaharu Tea Valley is a great place to visit if you’re doing a tour of Gopeng/Ipoh and its vicinity. The tour shouldn’t take more than 1h30m, since there isn’t much to do other than take pictures, look at the scenery and learn a little about the gaharu plant. Entry is free, but the guided van tour is RM10 for adults and RM5 per child, which is reasonable + you get to see a side of Perak beyond the usual touristy spots. However, bear in mind that it isn’t very Westerner-friendly since the guides speak mostly Chinese/Malay and there aren’t many English signs.