Piccoli Lotti is a labour of love.

The local artisanal gelato brand, which first opened along a quiet row of shops in Damansara Kim, was founded by Chong Nge Seng, who switched from a career in consulting, finance, and marketing, to venture into making desserts. In an interview with Options, The Edge, Chong describes how he sought to fill a gap in the local market for quality gelato made with fresh, local ingredients – going as far as Bologna in Italy to learn how to make these delectable frozen treats. The name Piccoli Lotti, in fact, means “small batches” in Italian, which is just how Chong and his team makes them.

Since then, Piccoli Lotti has opened several new branches, one of which is located in Bandar Puteri Puchong. The Hubs and I came across the shop when we were walking around after breakfast, and decided to satisfy our sweet tooth.

It was early, so we had the whole place to ourselves! The cafe is very Instagrammable, with Scandinavian/Japanese aesthetic featuring clean, minimalist lines, white walls, and light-coloured wooden furniture.

We made a beeline for the gelato counter. There were 18 types of gelato and sorbets to choose from during our visit; I believe they rotate these on a regular basis. There were, of course, classics like Belgian Chocolate, Caramel Cookies, and Hazelnut – but also fruity flavours like yuzu and mango, as well as creative “localized” ones like Pulut Tai Tai (a Nyonya dessert of glutinous rice with butterfly pea flowers that is usually served with kaya), Durian, and Pink Guava Asam Boi.

The Hubs had the Forest Berry Crumble. If you like berry flavours, this should be right up your alley. It’s creamy but not overpowering, and the sourness from the berries balances it out well.

I was intrigued by the Chrysanthemum with Cocoa Nibs, as I have never come across such a gelato flavour before. It was sweet and milky, but I could taste the subtle fragrance of chrysanthemum, while the cocoa nibs gave it an interesting texture and another layer of depth.

PS: The scoop here is huge by the way. Well worth the price!

While I enjoyed Piccoli Lotti, I couldn’t help but draw comparisons to the other local gelato/ice-cream brand, Inside Scoop. I think they’re both unique, since the flavours they offer are different – but taste-wise, I think Inside Scoop still wins in my book. It’s not to say that Piccoli Lotti isn’t good, but based on what we tried, their flavours seem to be a bit more subtle, whereas Inside Scoop tends to have stronger, creamier flavours, which I prefer.

Either way, this is great news for Puchong-ites: because we now have MORE options for gelato. And no one ever says no to gelato.

PS: I hope you liked this post! Please consider supporting my blog via Patreon, so I can make more. Or buy me a cup of coffee on Paypal @erisgoesto.

In Puchong, there’s Inside Scoop, a well-known local chain offering fresh, artisanal ice cream with a distinctive local twist. Founded by a husband and wife team in 2013, the company started off with an outlet in Bangsar, but it has since expanded to over 20 all across Peninsular Malaysia. With flavours such as Gula Melaka, Cendol, Teh Tarik and Durian that appeal to the local palate, it’s no wonder they’ve been able to hold their own against internationally renowned chains such as Baskin Robbins and Haagen Daz. 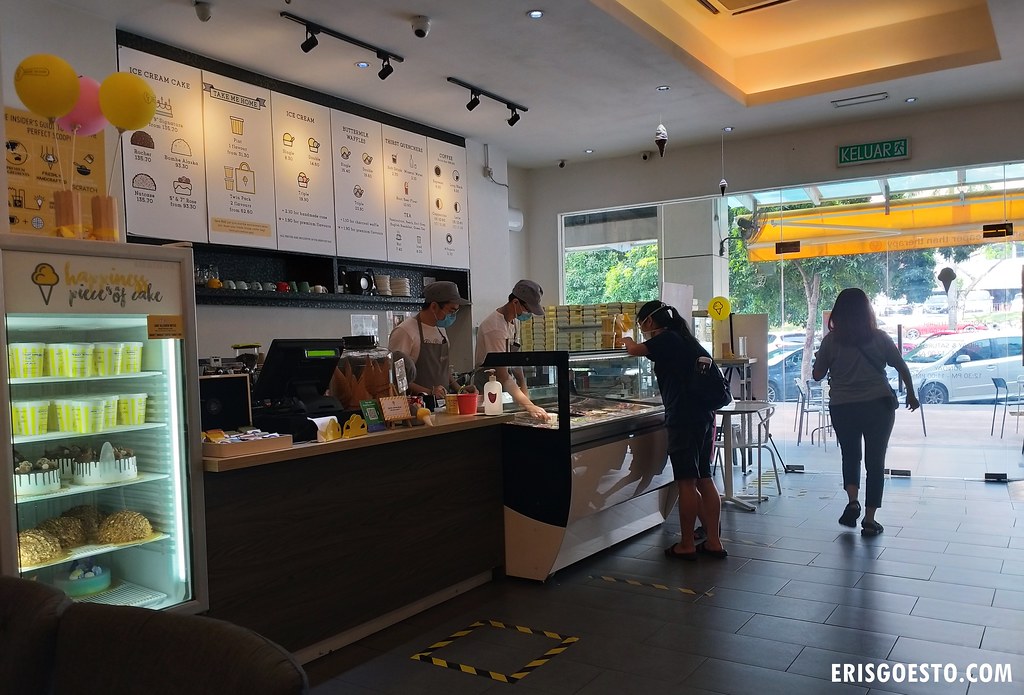 Their Puchong outlet is cosy, sporting the brand’s signature bright and cheery yellow. Adhering to the new normal, diners are required to check in with their details via QR code. They also no longer give out free tasting samples, for hygiene purposes. 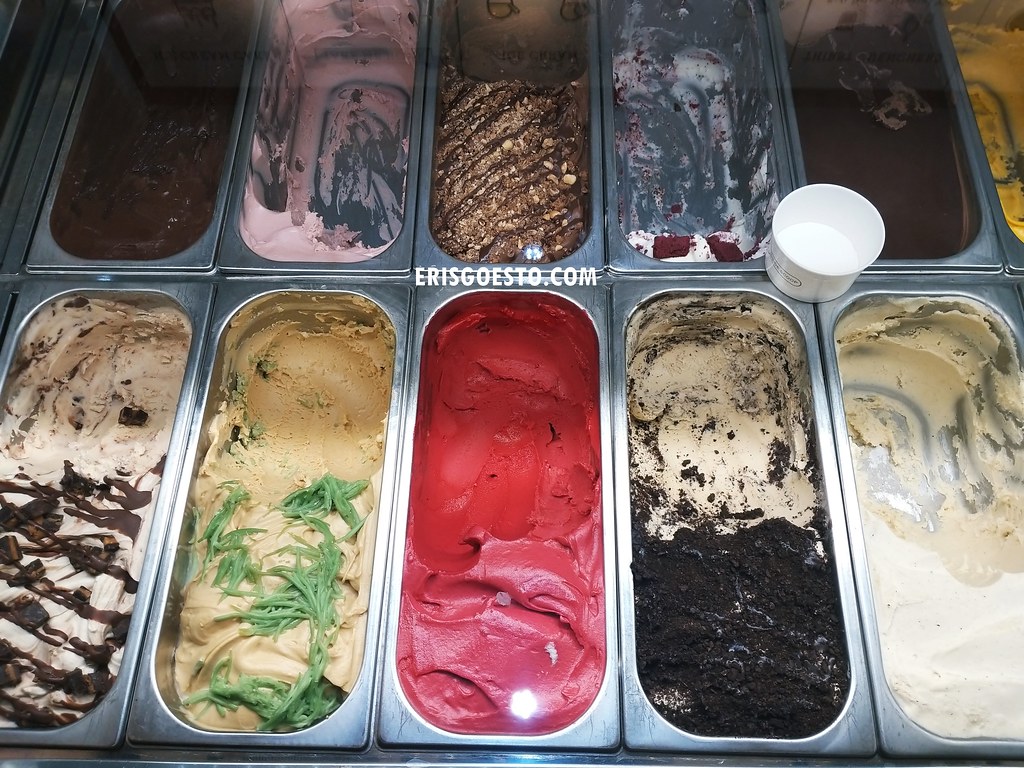 Inside Scoop offers over 70 flavours on rotation, and they carry both creamy gelatos and refreshing sorbets. During our visit, there was a good mix of local flavours(cendol, mango sorbet) and more traditional offerings (mint chocolate, peanut butter jelly, Nutella, vanilla, dark chocolate). 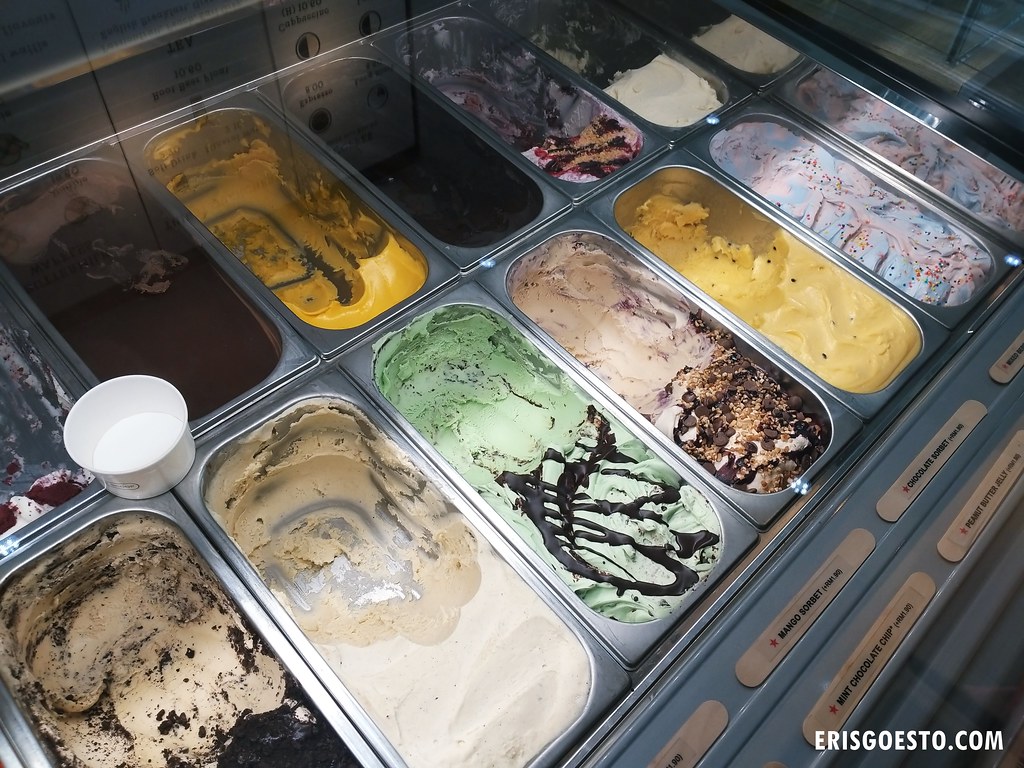 A single scoop in a cup costs RM8.30, while the double is RM14.60. Certain flavours go for an additional RM1.90. You can also get them in a cone, or with their buttermilk or signature waffles. 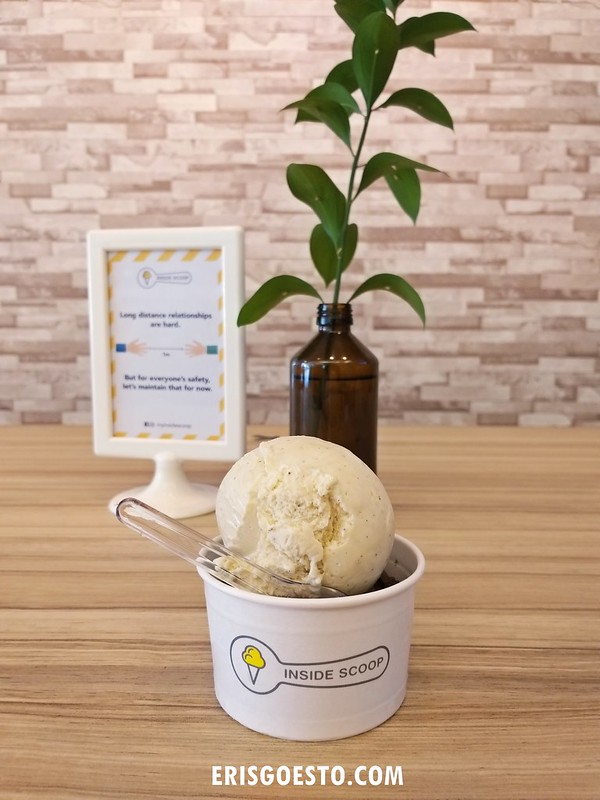 As a creature of habit, if I find something that I like on the menu, I tend to gravitate to the same choices every time I visit (because you can’t go wrong with them!). I also prefer the classics, so it was a combo of Vanilla Bean and Valrhona Dark Chocolate for me.

At Inside Scoop, all of their ice creams are handcrafted from scratch in small batches with no artificial flavourings or preservatives – and you can really tell from the taste. It’s creamy but not cloying, and definitely not too sweet. Lovers of dark chocolate will like the Valrhona because it’s thick, dark and rich, and pairs perfectly with the sweeter Vanilla Bean. 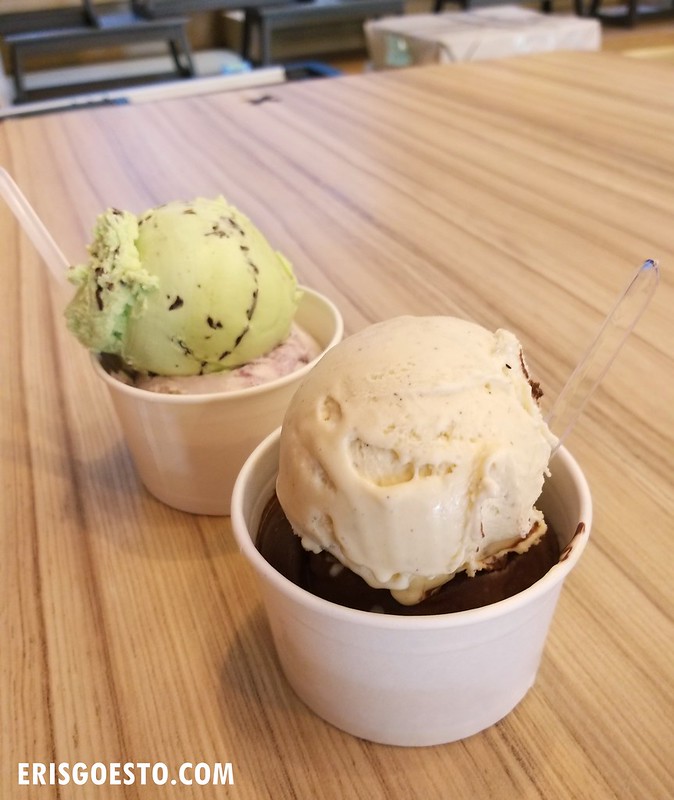 G and Max had Mint with chocolate chip and Mixed Berries with Cheesecake. I’m not a big fan of mint, but Max loved it.  The mixed berries flavour was excellent as well – felt like we were having actual cheesecake.

Too lazy to go out or just cautious due to the pandemic? You can get ice cream pints and cakes delivered right to your doorstep. Order here.

What do you get when you marry a venerable tea house with over 150 years of history, with a popular confectionery chain? If your answer is the world’s most intensely flavoured matcha ice cream, then you’d be right. 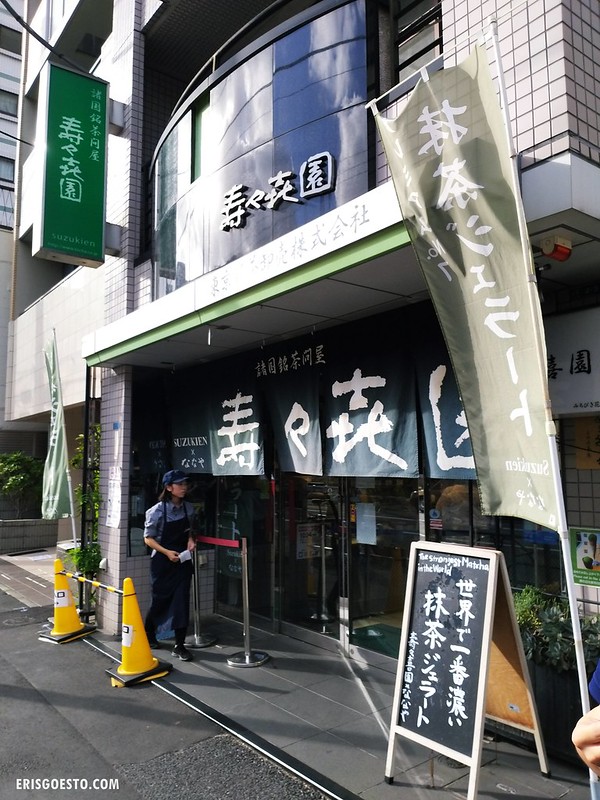 Suzukien, located in the Asakusa neighbourhood of Tokyo (just across the road from Sensoji Temple), prides itself in serving Premium No.7, aka a gelato so packed with the flavours of matcha, your tastebuds will do a stop, drop and roll. 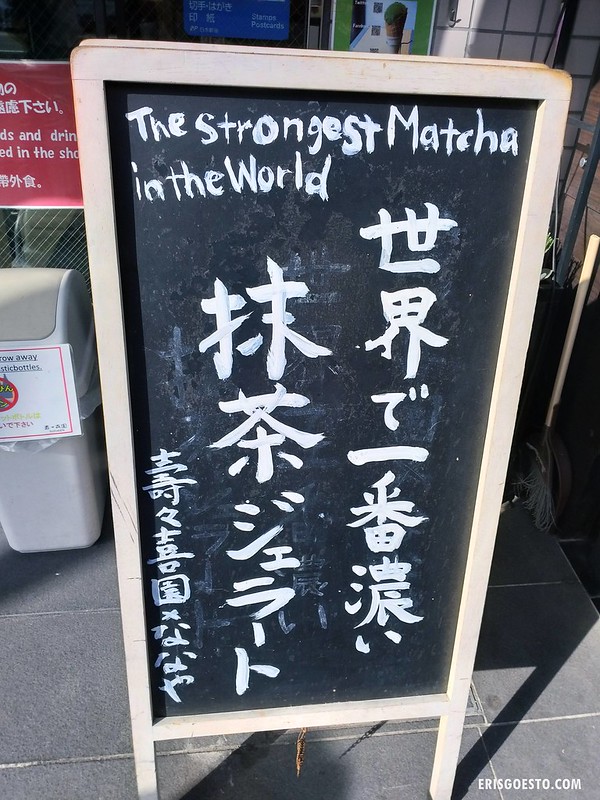 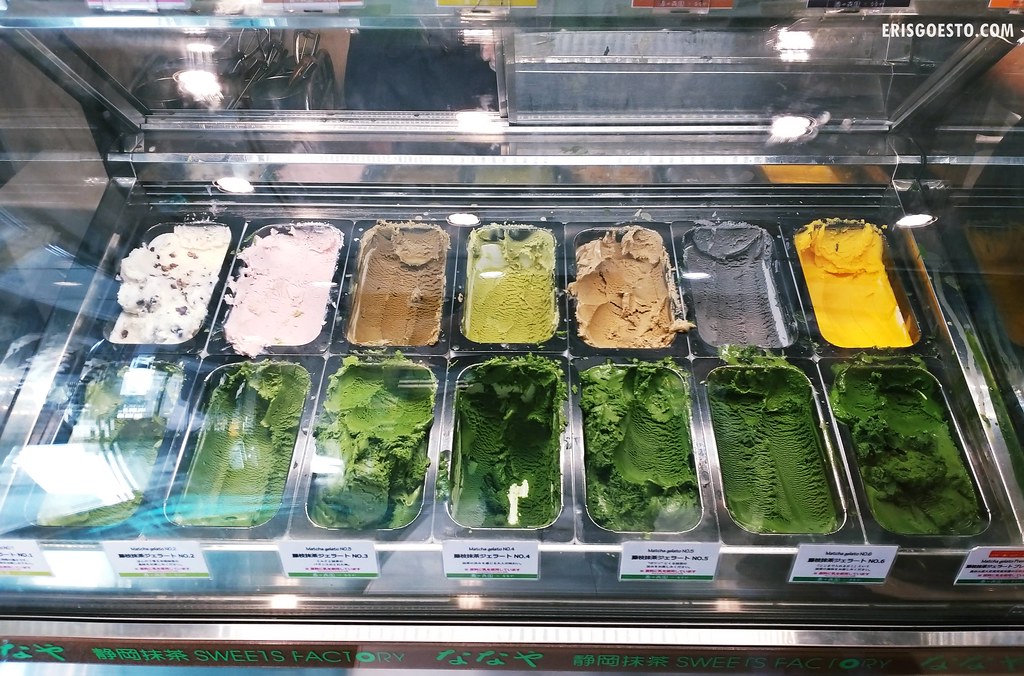 There are seven ‘degrees’ of matcha flavoured gelato served here, each more intense than the last. You can tell by the colouration itself, with the no.7 boasting a rich, almost dark green hue. The store can get pretty crowded, but they do have a small space at the back where you can indulge in your ice cream for a bit (standing room only). 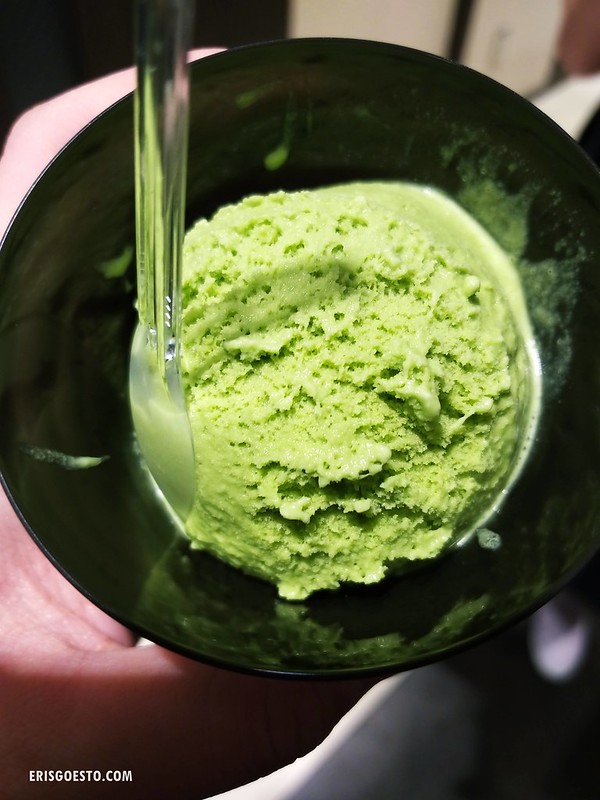 I was a little apprehensive to go all the way, so I picked something in between – probably a 2 or a 3. The matcha flavour was pretty pronounced, but mildly sweet, cool and refreshing – perfect for the summer heat. 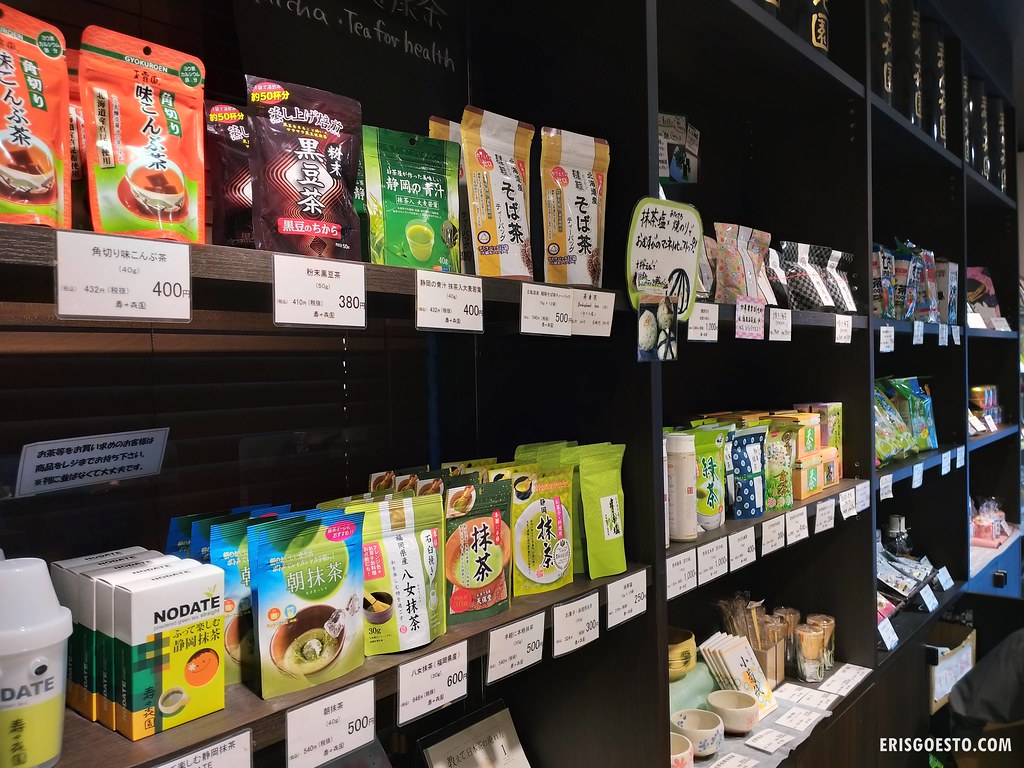 Aside from ice cream, you can find a variety of matcha products and tea souvenirs for sale here.

If you Google ‘best gelato in Australia’, chances are that Gelato Messina is on the list. Established in Sydney in 2002 by a family with Sicilian roots, the highly successful ice-cream chain has stores all over the country, including in Brisbane, Perth and Melbourne. It was the latter, tucked in a corner of Melbourne’s bohemian/hipster neighbourhood of Fitzroy, that I visited recently on a press trip.

We got there at a good time, as there wasn’t much of a queue. There were several tables on the sidewalk where customers were enjoying their cold treats on a warm autumn afternoon.

There’s the cardinal rule of enticing one’s senses of sight and smell at food establishments – and Gelato Messina definitely had the first one down pat. As soon we stepped into the airy store, we were greeted by delightfully vivid mounds of gelati in all hues and shades, as well as towering cones of wafer sticking out like a magnificent countertop crown. Benches and beanbags lined the brick wall, left deliberately unfinished for a rustic, bohemian look.

A wonderfully messy playground of sweet and chocolate-y dreams. They have a whopping 40 flavours available, with five weekly rotating specials.

The glass case next to the ice-cream counter houses Gelato Messina’s signature items – gelato cakes – perfect for special events and celebrations. There’s the quirkily named Dr Evil’s Magic Mushroom (background), sure to be a hit with the kids (and the kids at heart!).

Made to look like a toadstool, the top dome is filled with dark chocolate gelato, peanut cookies and dulce de leche, topped with layers of vanilla cream, chocolate sponge, a red ganache and white chocolate buttons for the ‘spots’. Meanwhile, the ‘grass’ is crushed biscuit, white chocolate and almond praline and popping candy.

Evil indeed, for the waistline.

Another bestseller is their Hazelnut Zucotto (foreground), the brand’s first gelato cake which features hazelnut and gianduia gelato encased in a frangelico-soaked hazelnut sponge and cream/finished with mirror glaze (for that shiny smooth appearance).

We got behind the counter for some backstage action, where a kitchen staff was busy whipping up ingredients for a limited edition gelato cake. This involved dipping a beater into hot caramel sugar and whipping it around to create glossy, gossamer-like sugar webs; as fine as spun thread. It was a tedious process, but I understand now why people keep coming back to Messina – it’s their commitment for fresh ingredients and making as much as possible in-house. When you control the ingredients and how they’re made, you also control the end flavours to ensure that everything is top quality.

Well, as they say, the proof is in the pudding (or in this case, the ice-cream) so we had to sample a couple of flavours. I love dairy, so I went for their dairy flavours (which are low in fat, coz they use less cream). We couldn’t try all 40, but my favourites were the Tiramisu, which was delightfully fluffy thanks to the egg, marsala and mascarpone, with lady finger biscuits soaked in espresso coffee, as well as the Vanilla which also had eggs, organic Tahitian vanilla bean and fresh milk for an awesomely creamy texture. Thick, rich and not overly sweet.