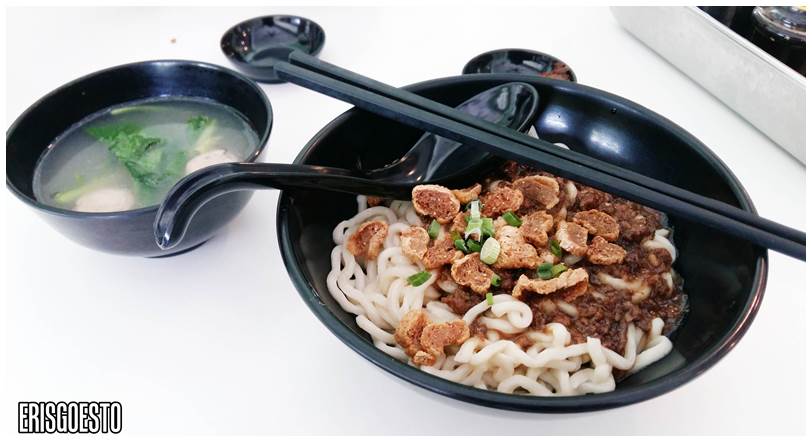 Grabbing a quick lunch at Bandar Puteri Puchong over the weekend! 🙂 Mum initially wanted to get porridge but we didn’t wanna drive so far so we ended up getting pan mee at Mian Dui Mian instead.

What is pan mee? It is Hakka-Chinese noodle dish from Malaysia,  made up of thick or thin (sometimes hand shredded) flour noodles in either dry or soup versions. Traditionally, the soup one has slices of pork or minced pork, anchovies and vegetables but now they have loads of other types like chilli, curry, and more.

Mian Dui Mian (a clever play on words which means ‘face to face’ or ‘noodle to noodle’: the word for face and noodle sounds similar in both Cantonese and Mandarin) specialises in pan mee and Sarawak noodles. Mum had the latter, while I got minced pork pan mee, which came topped with crunchy fried fish crackers. It was meh – the sauce had a weird aftertaste that reminded me of that almond smell you get from cockroaches (!!!). Not sure if will come back or maybe it’s coz I picked a dish that wasn’t their signature.

Still, they seem to be doing brisk business as the place was packed over lunch time. They should do more to improve their ventilation – it was so hot on the patio that I got up from the seat with my thighs so drenched it felt like I had peed myself

The hot weather has been relentless this past couple of weeks; quenched it with some iced coffee. Drink lots of water, guys!