Update: This outlet is permanently closed.

Idk about you but sometimes I like to go out and walk around on my own, watch a film, browse at a bookstore, visit a museum, have a nice meal. Some people think it’s sad, but being an extremely introverted person (funny, seeing as how I’m in communications), me-time is essential for me to recuperate.

So here’s a short post on my solo dinner at Sushi Tei @ Setiawalk Puchong!

Weather has been cloudy/rainy lately so it was nice to tuck into a hot bowl of sukiyaki, which is meat (usually beef) slowly cooked and simmered in a soy-sauce-based broth along with vegetables such as cabbage and carrots, as well as mushrooms, onions and tofu. Very healthy! It is usually served with a raw egg, which you beat and dip the meat immediately after cooking to give it that silky smooth texture. At the end of the meal I like to add the egg into the broth so it becomes like an eggy soup.

PS: The meat here wasn’t sliced thin enough imo, was tough even though I didn’t overcook it. 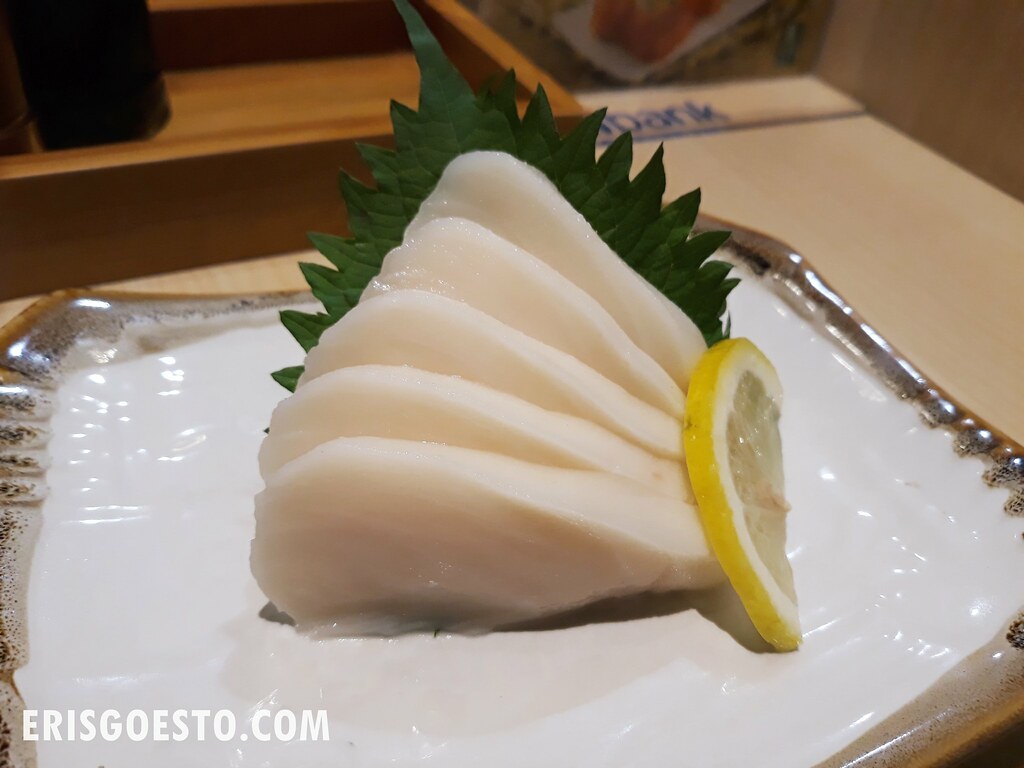 A beautiful plate of butterfish. Butterfish is my favourite sashimi and quite underrated, as most people prefer having salmon or tuna. Like its namesake, it has a buttery aftertaste that is creamy and rich. 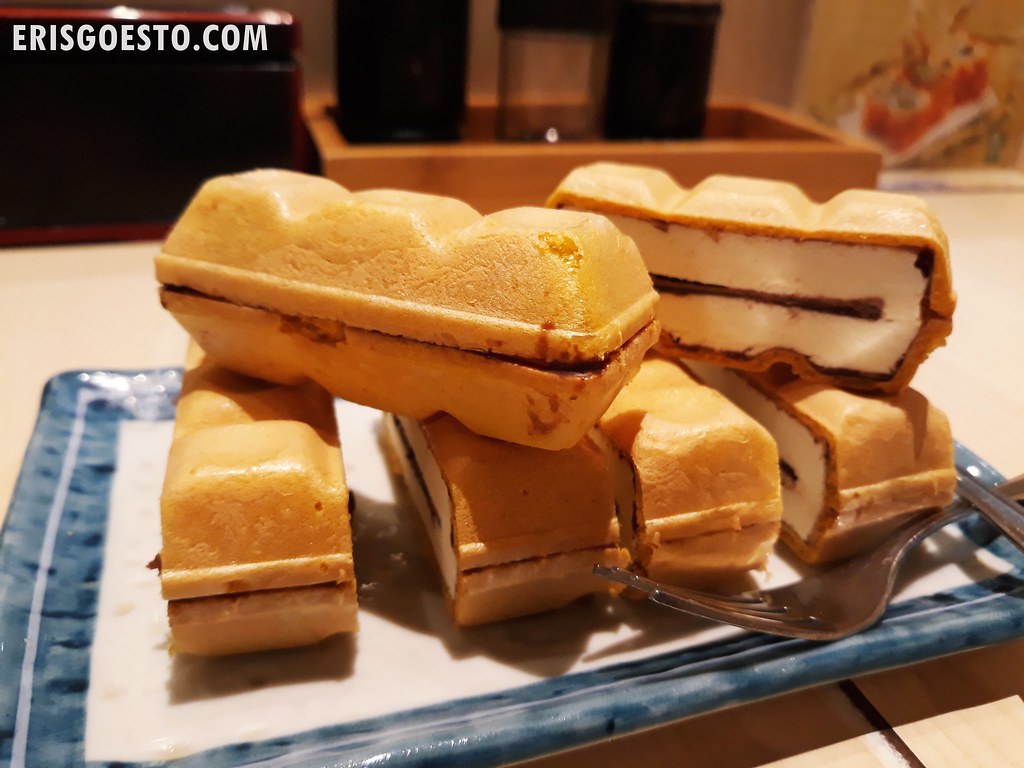 Still room for dessert ! Ordered an ice cream waffle. Pastry was nicely done, compact on the inside (none of that airy shit), vanilla ice cream was mild but well balanced with the chocolate wafer center.

All in all a satisfying meal and it helped me recuperate after the week’s hectic socialising lol.

Price: Slightly pricier than regular sushi joints. My meal above came up to around RM60.

Update: This restaurant is permanently closed.

Been having a rough week at home, so when C asked me out for dinner, some food-therapy was in order. We went to Sushi Tei, one of the fancier Japanese joints in Setiawalk, Puchong that’s always packed with customers.

For starters, a plate from the conveyor belt – Chuuka Idako or seasoned baby octopus. Served cold, the sauce was sweet and complemented the natural seafood-y flavours of the chewy octopi. I still prefer the version at Sushi King though.

Each slice was thick and cut well, but the seafood taste was faint. Probably the result of being frozen for a long period of time. .__.

Gotta get ’em carbs in! The beef ramen was warm and comforting, with tender slices of beef swimming in a savoury soy-sauce broth and ramen with an al-dente texture. Nothing much to complain there.

Sushi Tei used to have these mini bowls going for just over RM10+, but they’ve done away with it so we’re stuck with the big bowls. Note that prices are higher than the usual Japanese chain restos like Sakae Sushi or Sushi King.

Do get their Chicken Karaage, which comes in five juicy chunks, well marinated with crispy skin and served with a side of salad and mayo. Order a bowl of rice and or have it on its own as a snack! 🙂

To cap off the meal, we tried the Matcha Nama Chocolate Ice-Cream. Coated in Matcha, these roll-shaped treats have a hard texture, meant to be eaten whole by popping one into the mouth and letting it dissolve. The sweetness of chocolate was offset by the bitterness of the matcha powder.

Whenever I’m in SetiaWalk Puchong and crave Japanese food, there are only two options to choose from – Bonbori on the first floor and Sushi Tei. While I like Bonbori’s bento, the service and waiting time isn’t worth it + it’s pricey. Sushi Tei serves decent fare; the only drawback is that it’s outlet doesn’t have Internet reception for some reason. Maybe they disabled it on purpose so people would focus on the food lol. 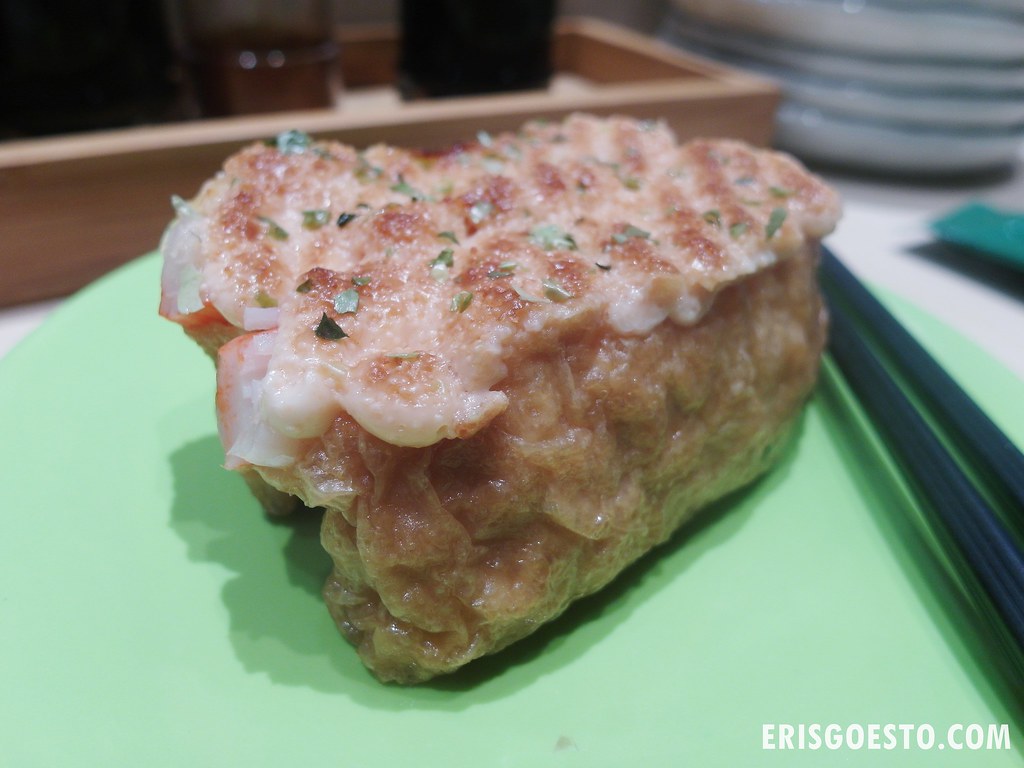 Mentaiko mayo inari (bean curd topped with codfish roe sauce)!   To those who have never tried mentaiko before, it’s savoury and has the texture of cream cheese but with a fishy overtone. Mixed with mayo and coupled with sushi rice and sweet beancurd skin.. voila!  A treat for the taste buds with every flavour. 🙂 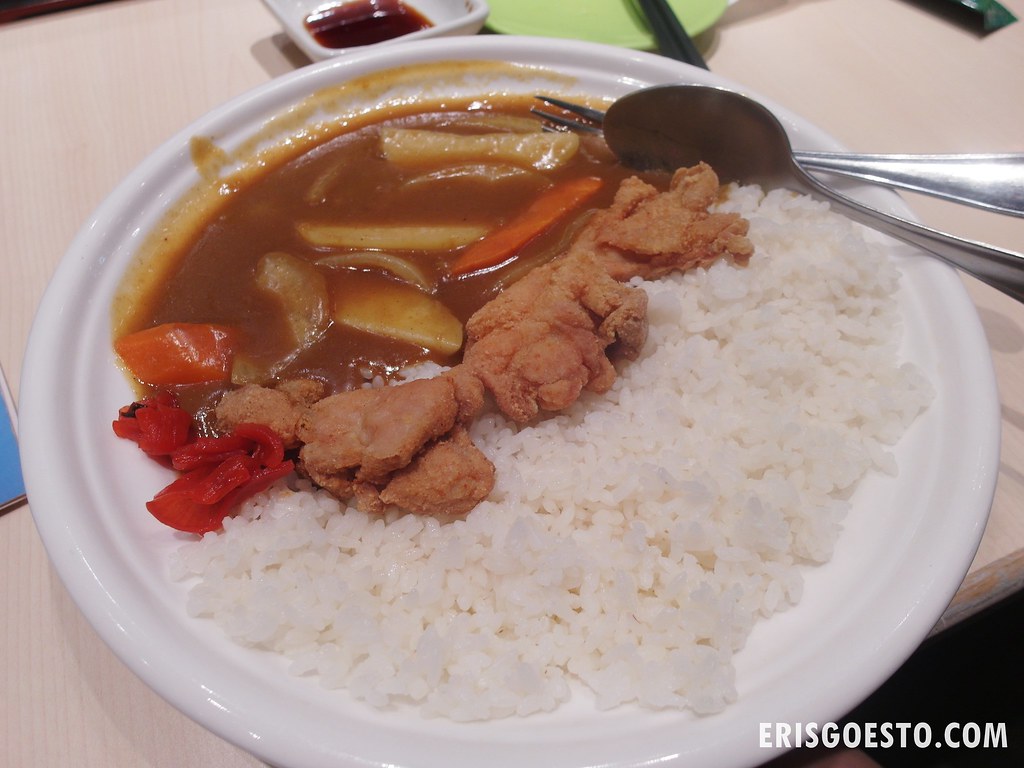 For the main course, I had curry chicken karaage rice. The taste was okay, but the potatoes were hard and not cooked well imo. Curry sauce was good and went well with the rice. The karaage was perfectly fried, but the portions were so small T^T For RM18++, I don’t think it was worth it. 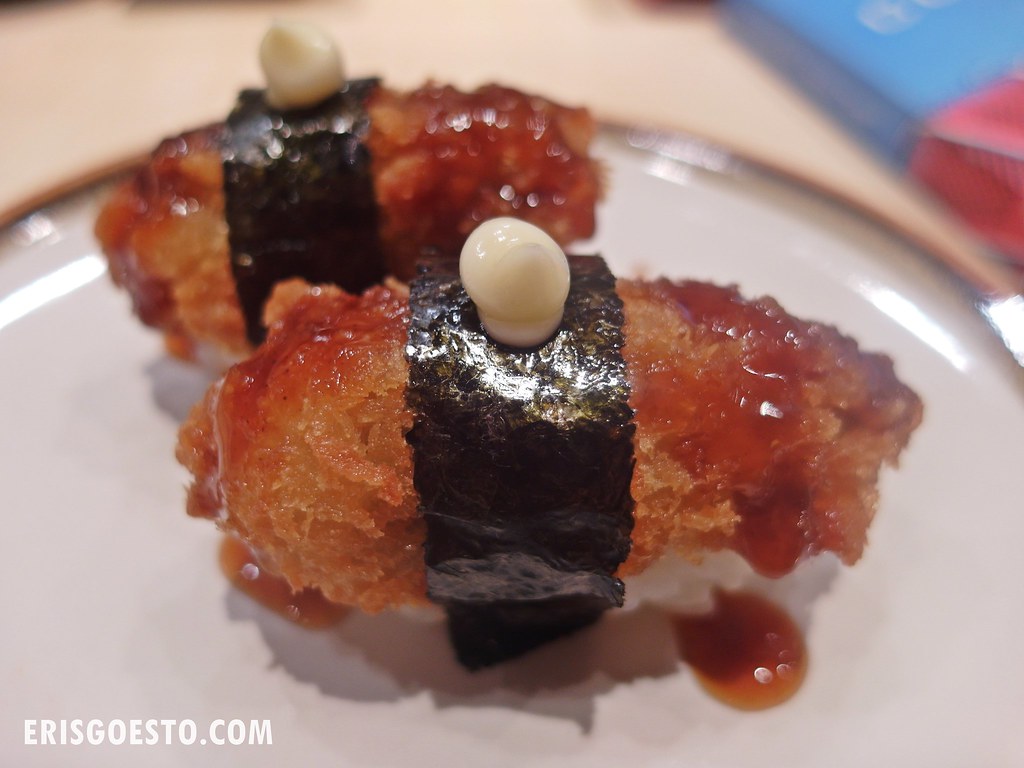 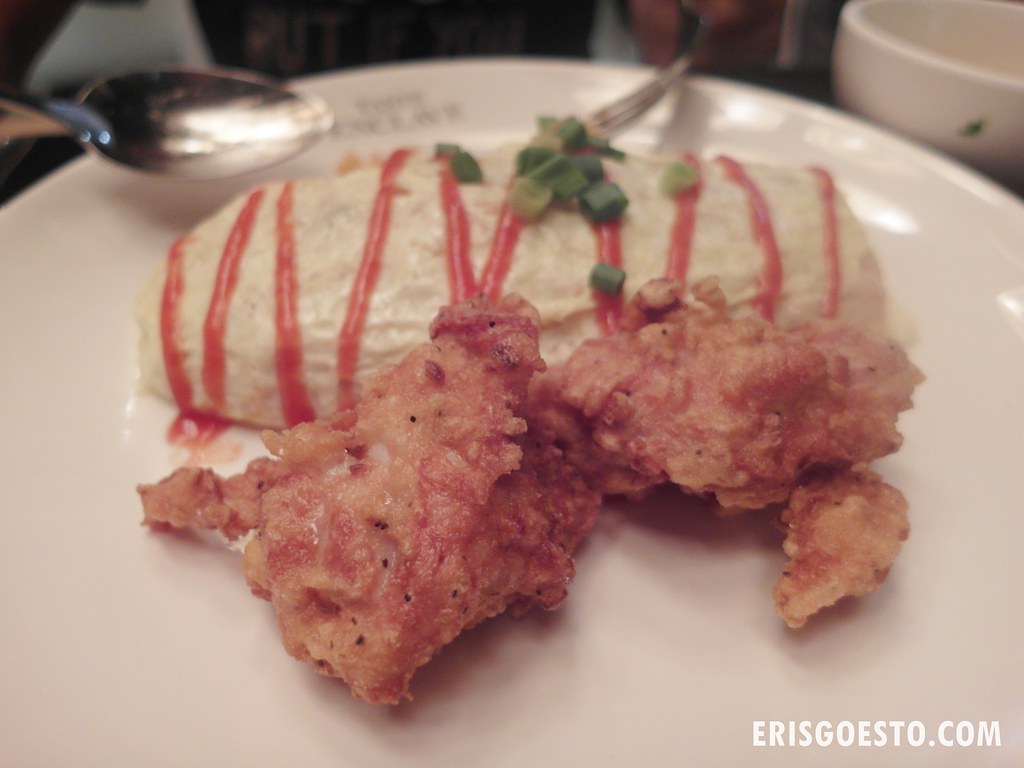 Father’s Day celebration at Avenue K, a newly opened shopping mall opposite KLCC. I was working til late last weekend, so the fam took a train and met up with me at the place. We checked out Avenue K’s food court, which is on the top floor. There are lots of stalls offering different cuisines from all over the world, from Vietnamese to Japanese, Chinese, Western fare and more.

The bro had omurice with fried chicken. Well I wasn’t hoping that it would be anything like the authentic Japanese ones (check out this awesome video!) but this was still disappointing. They should just call it ‘repackaged Nasi Pattaya’. The rice was infused with tomato sauce flavour and wrapped in a thin omelette sheet. If the egg had been prepared well it would have been fat and fluffy. 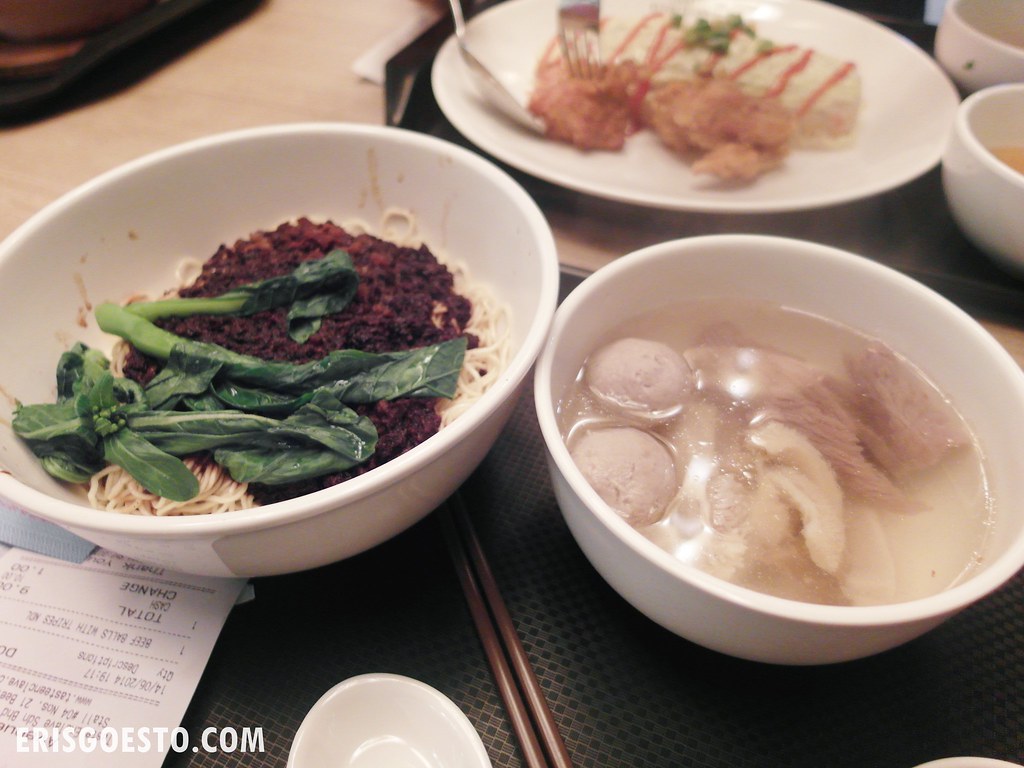 They have a No.21 Beef Noodles stall here! The original was a street stall in KL that became really famous and they started opening up franchises in shopping malls. I always go to the one at Lot10 whenever I’m in the Bukit Bintang area. For RM9 and a hefty portion, it was worth the price. The springy wantan noodles are topped over with zhajiang (minced beef sauce) and patrons can opt to have a bowl of beef balls or tripe (above), which includes the stomach, belly and intestines.

The beef belly was unbelievable. It was cooked til it literally had a melt in the mouth texture. I don’t have to say much about the stomach and intestine – cooked well and chewy.