Buddhism came to Japan very early – around the 6th century – and the archipelago is dotted with ancient shrines and temples. Unlike regions where the rise and fall of kingdoms have resulted in a change of the major religions (think the ancient Indonesian kingdoms which used to be Hindu, then Buddhist, and now Muslim), Buddhism in Japan has survived the influence of outside forces. Today, many Japanese practice either Shinto-ism or Buddhism, or a blend of both, as the principles tend to complement each other. 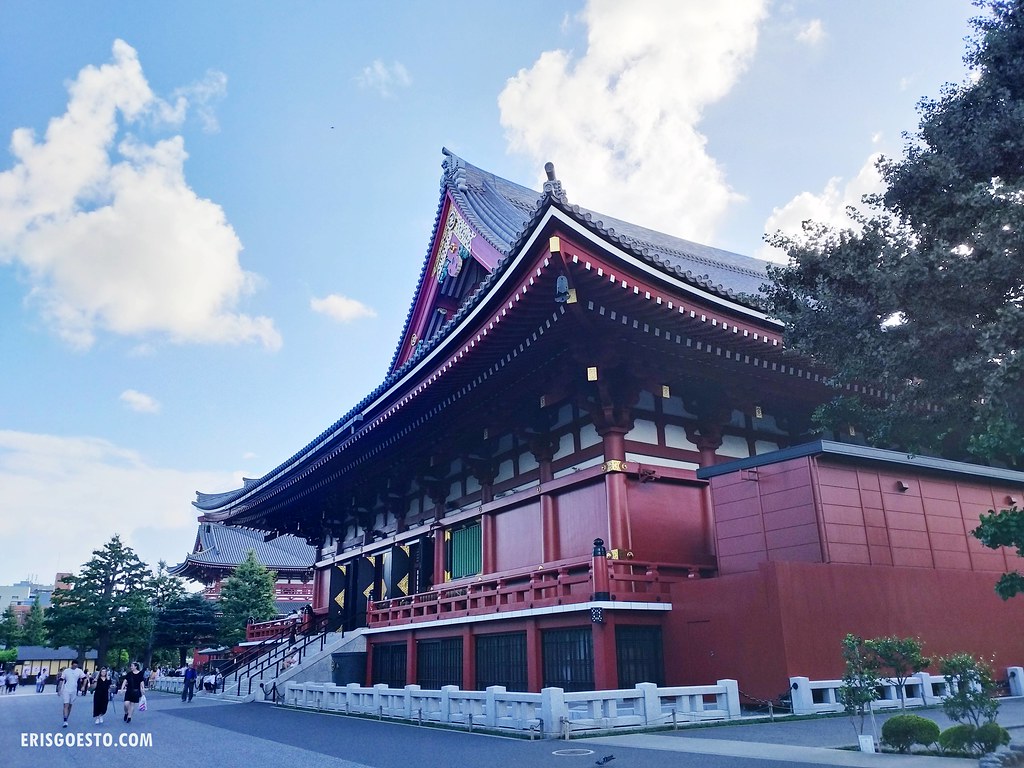 One of Tokyo’s most important Buddhist temples, also its oldest, is the Senso-ji Temple in Asakusa. Completed in 645, it is dedicated to the bodhisattva Kannon, or Avalokitesvara, who is depicted as the female goddess Guanyin (the goddess of Mercy) in Chinese Buddhist beliefs.

The story of how the temple came to be goes that two fishermen found an Avalokitesvara statue while fishing near the river. The chief of their village built a shrine for it, and it slowly grew into a magnificent temple, with worshippers coming from far and wide. During the Tokugawa era, it was even proclaimed as the main temple for the Tokugawa clan. 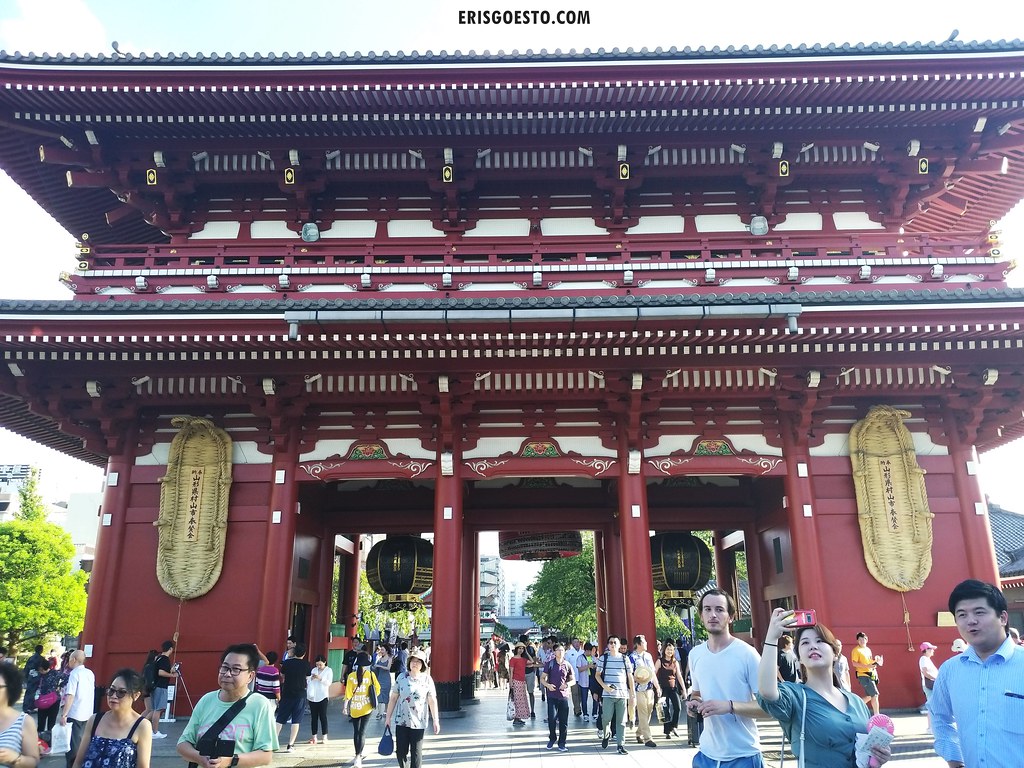 Entering from the South end, visitors will first pass through the outer gate guarded by two kami (Shinto deities) – Fujin and Raijin,gods of wind, lightning and storms – and the Buddhist gods Tenryu and Kinryu on the east and west, respectively.

The temple grounds house dozens of stalls selling everything from souvenirs and food to toys and clothes. After a long stretch, you will be greeted by the Hozomon, ie the ‘Treasure-House Gate’, or the inner gate before you enter Senso-ji’s main courtyard. Towering  two-storeys high with a wide berth, the structure is impressive to look at, and features giant lanterns hanging down each of the archways. We arrived right before a typhoon was forecasted for the night, so the main lantern had been rolled up and tethered for safety. 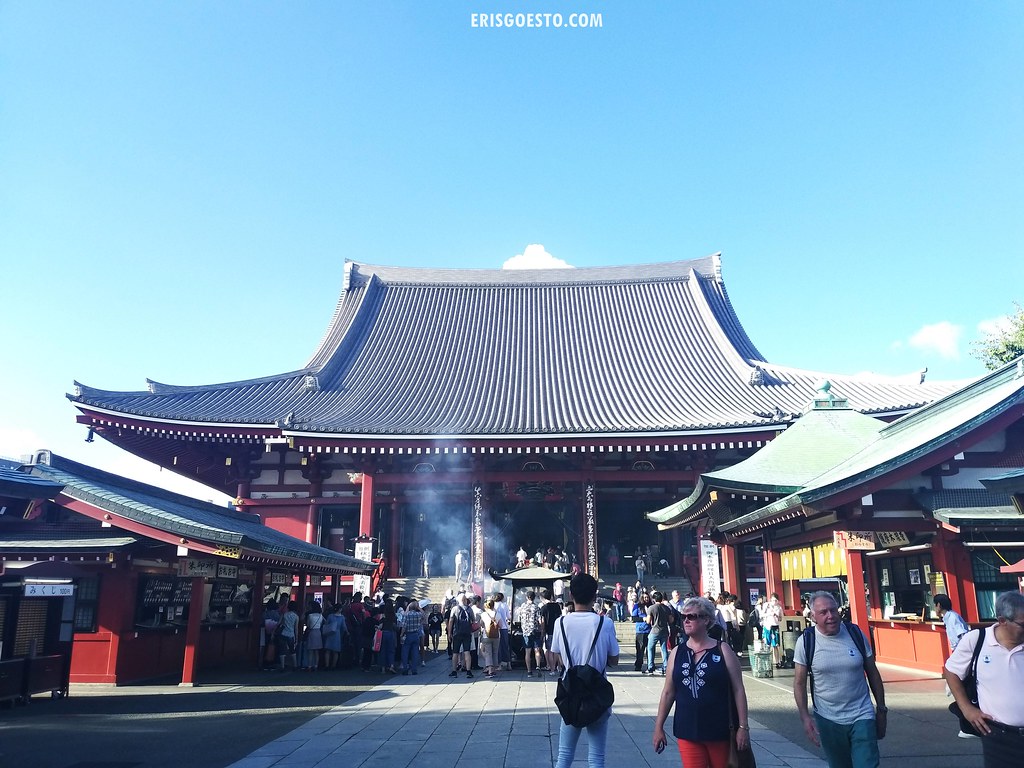 The main temple is quite a sight, but what we’re seeing is actually a reconstruction – albeit a very accurate one. The original temple was bombarded by air raids during World War II,\ and much of the grounds and its buildings were destroyed. The roof, for example, is made from titanium, but retains its traditional architecture. 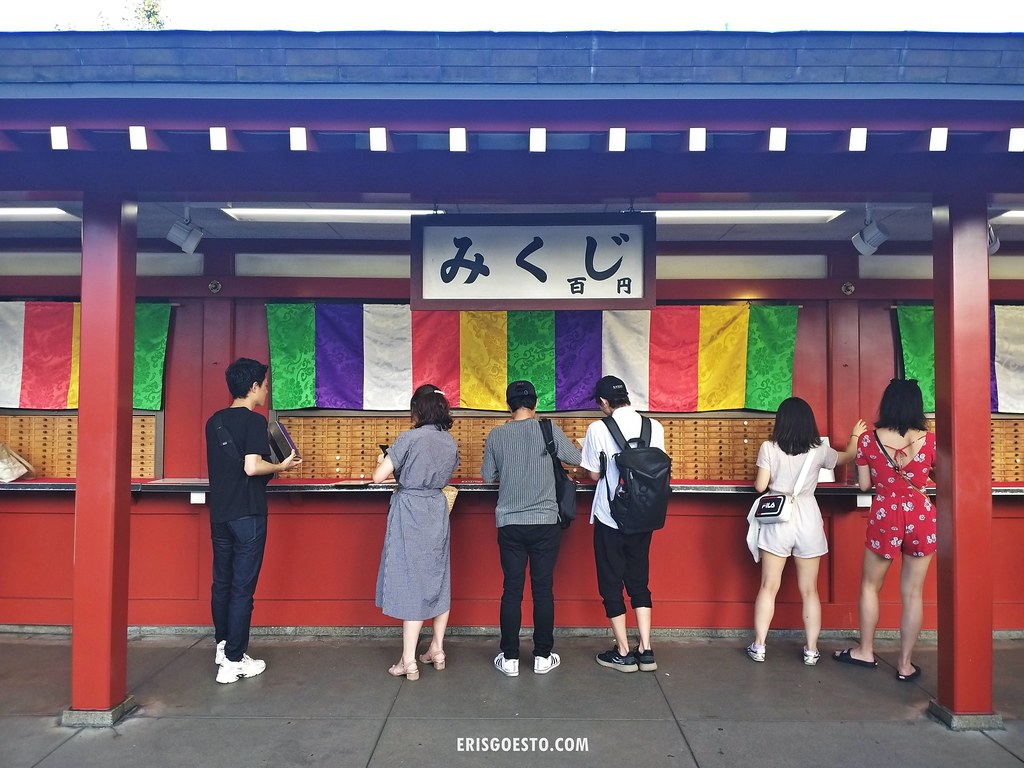 Booths where you can get a fortune reading. 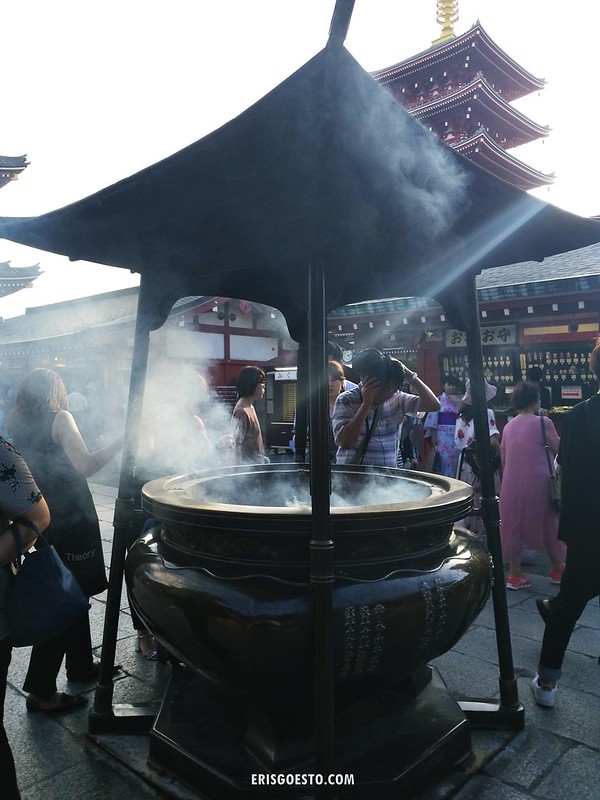 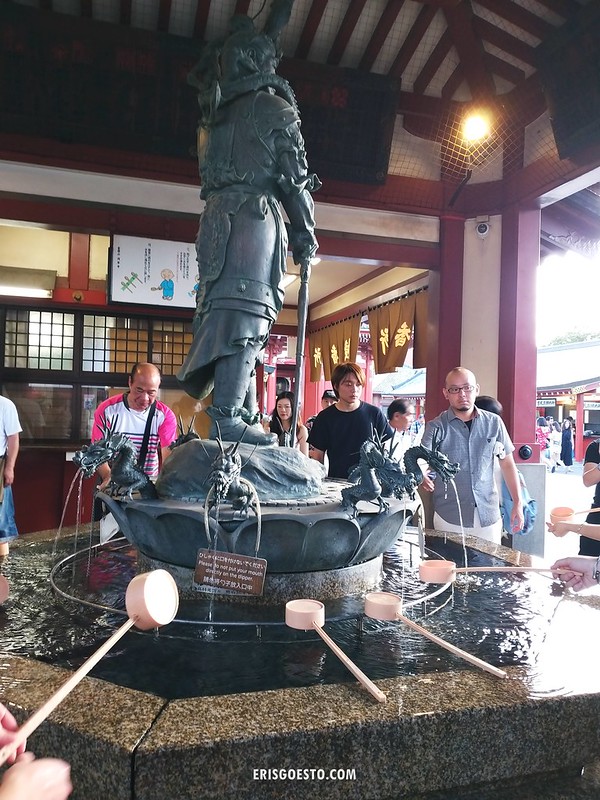 Before entering the temple, you can cleanse yourself at a basin by scooping water up with a ladle. There is a proper way to do this with instructions written at the site, but I can’t recall – I think you’re supposed to wash your left hand, then your right, your mouth and finally the handle? 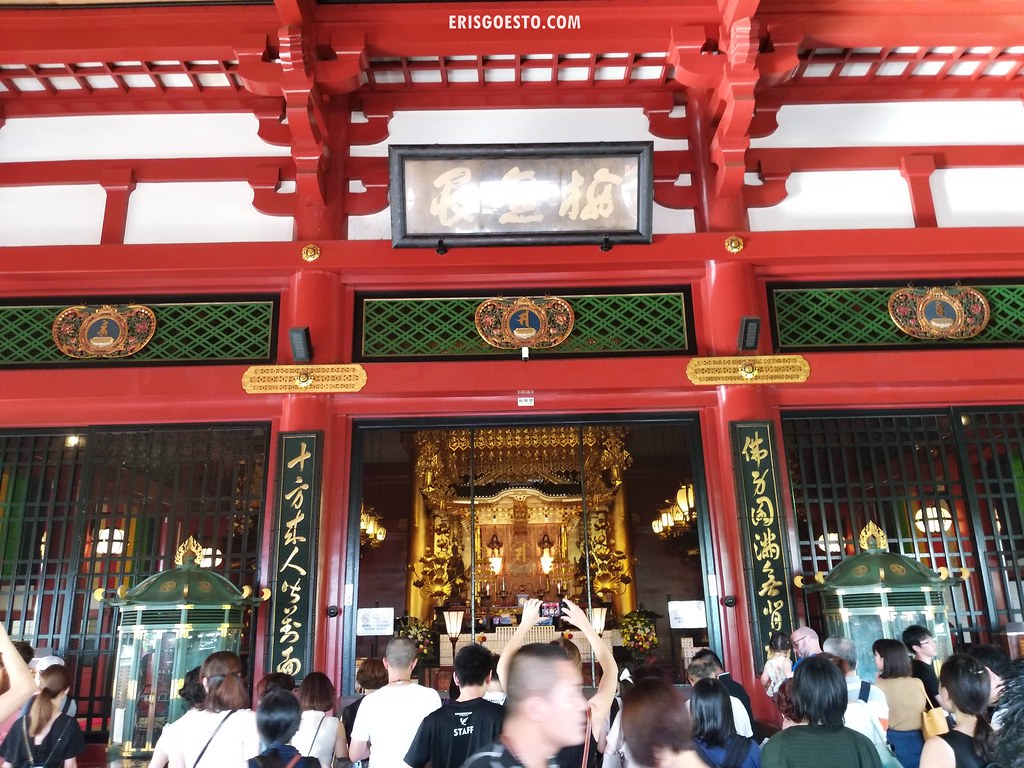 The main hall, with the goddess Kannon in the centre. The original statue is kept hidden, similar to the one I visited in Nagano. You can make an offering by placing some coins in a large wooden container at the front, before paying your respects. 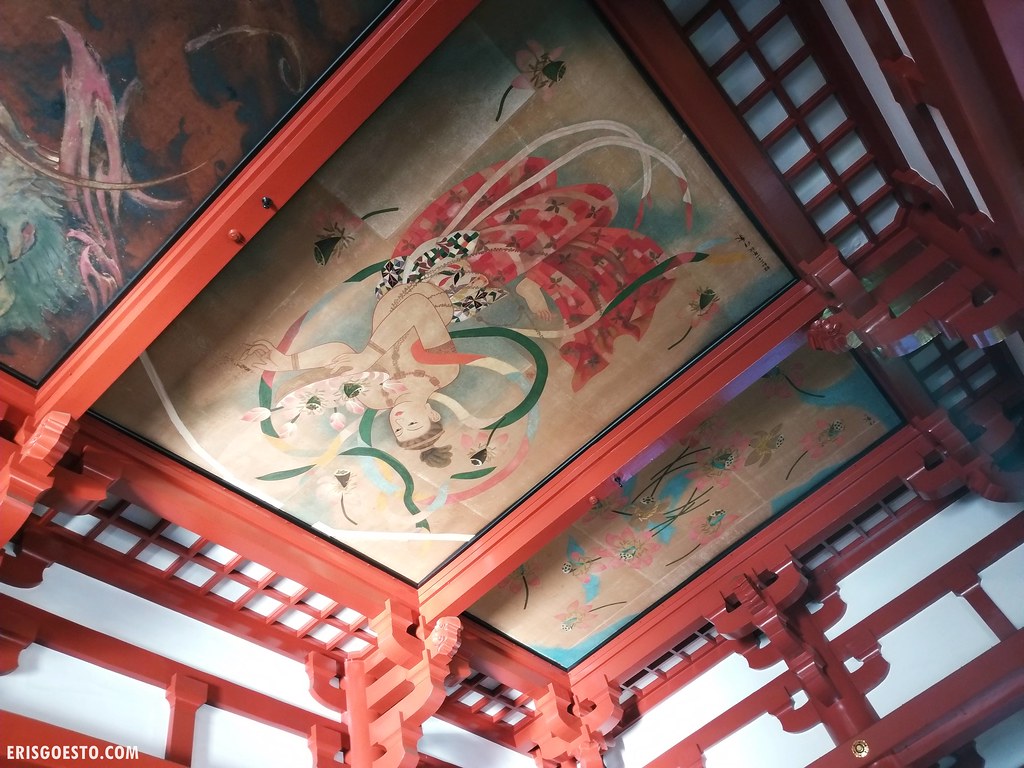 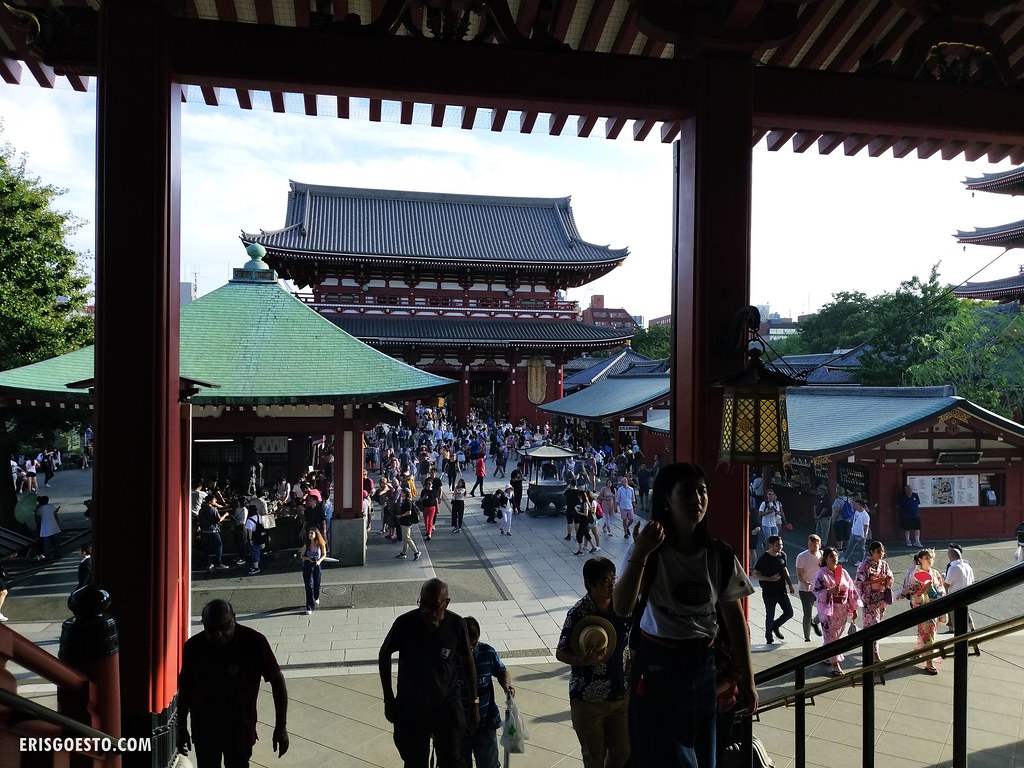 Opening hours (temple): 6AM – 5PM (Daily). Note: The temple grounds can be visited at any time.