Aside from hotpot and dimsum places, Puchong is best known for its Vietnamese restaurants. The Moo is a big fan of Vietnamese cuisine, and we usually go to this cafe called Banh Mi for our fix, but decided to try a new place over the weekend called Saigon Memoir, in Bandar Puteri Puchong. 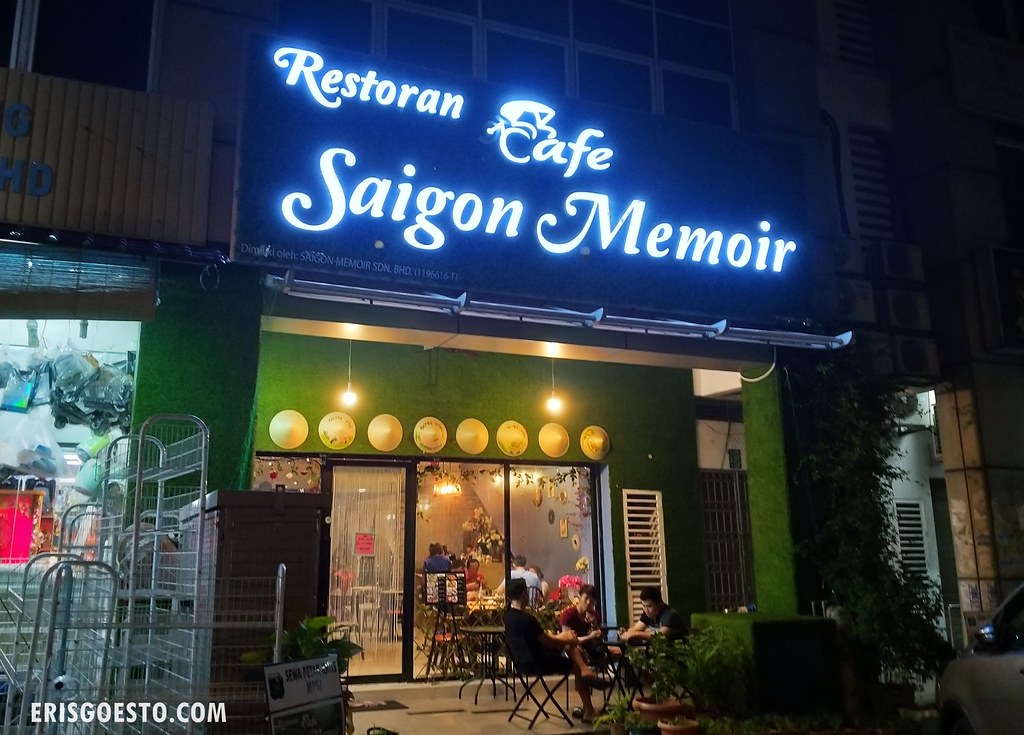 The restaurant boasts a bright and cheerful look, with Vietnamese hats gracing the facade and a small herb garden at the front. The inside is a nice blend of modern and traditional , with lanterns dangling from the ceiling and black and white framed photos of everyday Vietnamese life. The cool blue walls and dim lights make for a cosy setup. 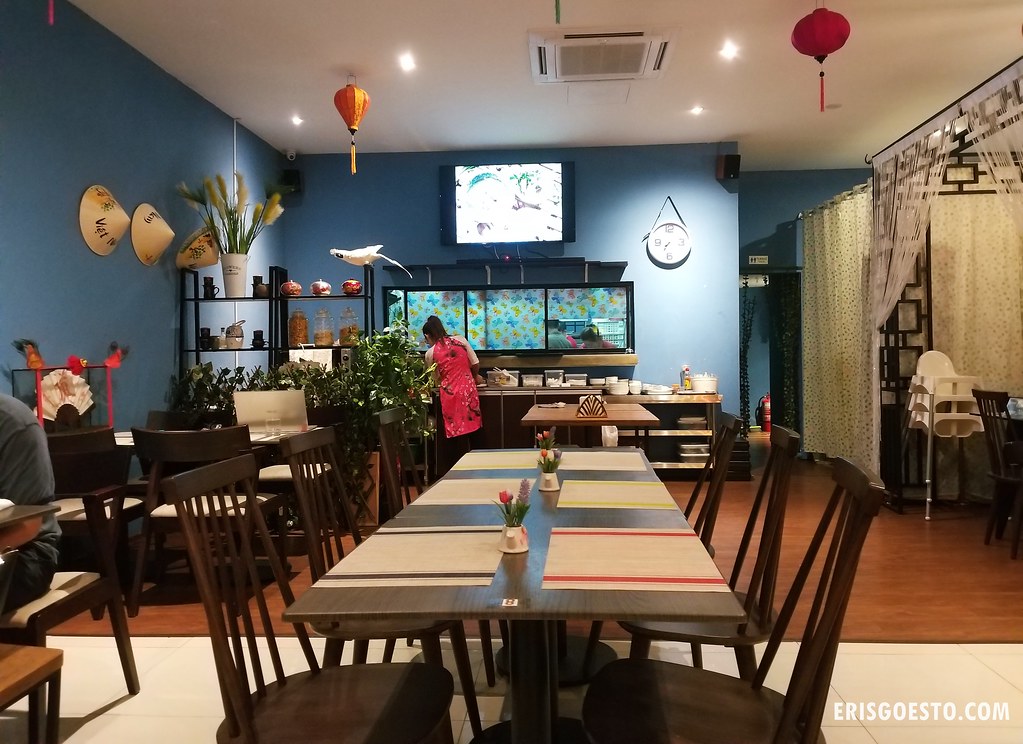 One qualm I did have about the place was the seating arrangement. The tables were squashed so tightly together, the waitresses actually had problems maneuvering and getting the dish to the tables in the middle lol. 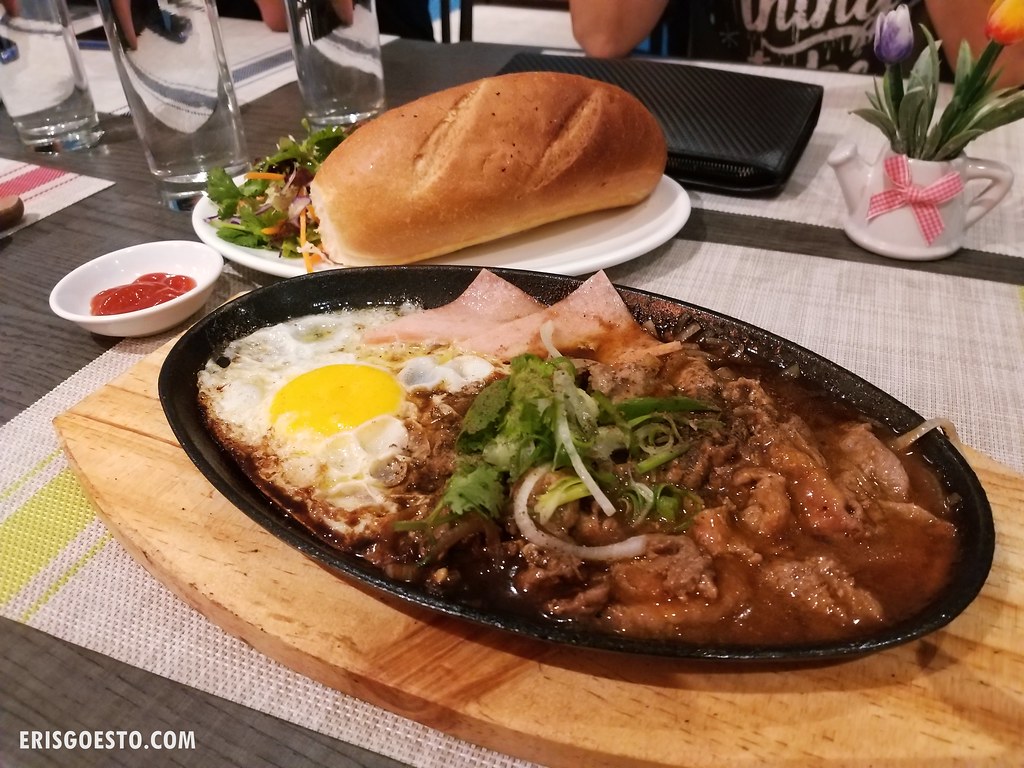 In the mood for meat, so I had the Sizzling Beef Sandwich (RM18.90). The dish was served with baguette, fried egg, ham slices, veggies and herbs. You can stuff the baguette with meat – sort of like a DIY Banh Mi. The baguette’s crispy texture went well with the tender, flavourful slices of beef, and the bread was perfect for dipping into the peppery meat sauce. 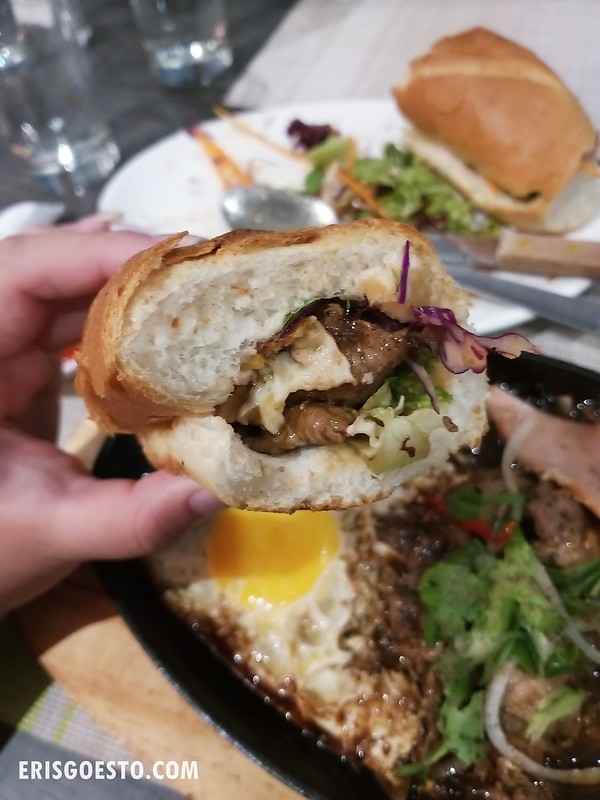 Heaven in a roll! It was filling but didn’t feel too heavy afterwards. 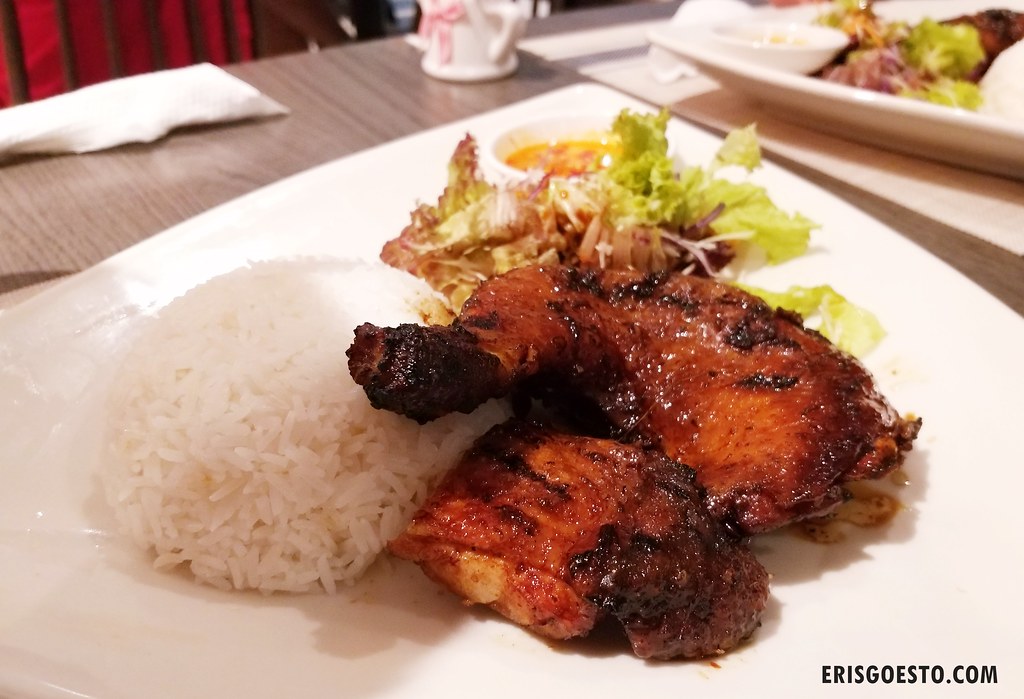 Pops and the Bro both had the Grilled Lemongrass Chicken with Rice (RM15.90), which came with a humongous chicken thigh. Loved the smoky, slightly charred exterior and the juicy chicken which was cooked to perfection – albeit, the lemongrass flavour was not very pronounced. 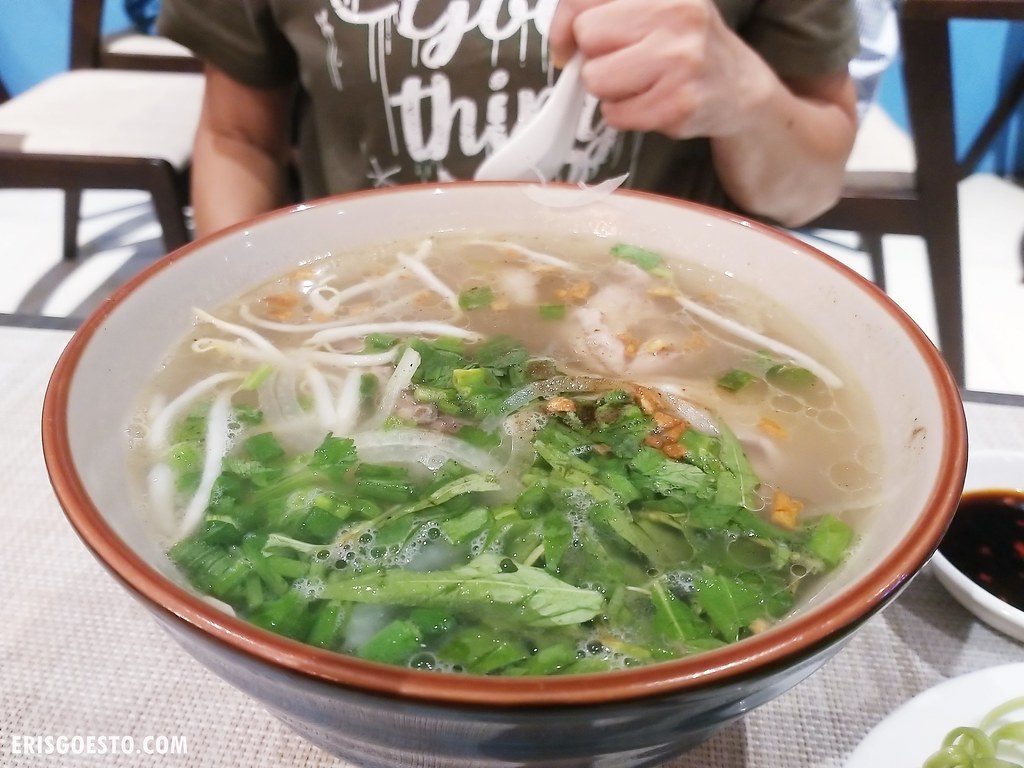 Moo’s Mien Ga (chicken glass noodle soup) was chock full of herbs and veggies. Did not try this because I abhor the taste of beansprouts :’D

We did have to wait awhile for the lemongrass chicken because they cook it to order, but service was otherwise fast, efficient and friendly. Food felt authentic and tasted good, and while prices are above average, the huge portions more than make up for it.

Hey guys! Sorry for the lack of updates. I’ve been caught up with a lot of things and haven’t had time to blog. *sad face* There are so many backlogged entries! ;___; I’ll try to put them up soon before I forget.

Anyway, here’s a quick one on my recent visit to a local Vietnamese cafe near my place called Banh Mi. Yep, like the bun. Suggested to me by colleagues who have been to the place. Goes to show that you can live in a city and not know everything..

The cafe is housed in a double storey building and was packed on a Saturday afternoon – but service was fairly fast and efficient. The tables have a call button so you can ring the waiters. Since it was a really hot day, I got cold and refreshing sweet tea. It had a bit of the ‘Hacks’ flavour to it so might not be everyone’s cup of tea (hahahaha I’m so lame) but I enjoyed the taste.

Mi had lemongrass frog with rice. Served in a claypot, the sauce was packed with flavour, and the lemongrass gave it a strong aroma. Quite salty, but the meat was soft and tender.

If you’ve never had frog, it tastes like chicken. I’m not kidding. Smoother, tender-er chicken.

Pops and I had their signature pork banh mi. For those who don’t know, Banh Mi or Vietnamese sandwich is a popular staple and can be found all over Vietnam. It refers to generic breads of all kinds, but the one that we know here is the kind that uses a hard, crusty baguette. Since Vietnam was once under French rule, a lot of French influences can be found merged with the local Asian-style cuisine. The inside of the Banh Mi was stuffed with carrots, turnip, cucumber slices, ham slices and bits of roast pork with a nice balance of lean and fat.

Besides pork there are loads of other options available too like fish, chicken, ham, etc.

I think if you’re an older person, Banh Mi might not be the best dish for you. The crust is hard! And it flakes everywhere so you get a messy table 😛

Rounding the meal off with something sweet – pudding with coffee. The coffee’s bitter taste offset the sweet flavour of the caramel-ly pudding.

You know how they say if a place is packed with locals, then the resto is authentic? Well we saw loads of Vietnamese at the cafe, so rest assured you’re getting some pretty awesome food. Wait can be long though esp when the place is packed.

Have you tried banh mi? Although the term is used to describe all kinds of bread in Vietnamese, it is synonymous with the sandwich version. Vietnamese cooking is very much influenced by the French, thanks to centuries of colonisation, and the banh mi is the perfect marriage of cultures. There is the hard baguette, mayo, pate and jalepeno, combined with native Viet ingredients like cilantro, cucumber, carrots and daikon + slices of meat.

While in Ho Chi Minh City, we tried a stall just outside a local plaza – and were mindblown by how tasty it was. All for only 5,000VND (less than Rm1!).

Thick slabs of different meats such as charsiu slices and pork belly lined the display window along with bread, veggies and sauces. The lady ladled a hot meaty broth straight into our bread before loading it with lots of veggies. The result was a beautiful blend of textures and flavours  : crunchy, wheaty bread, juicy chunks of pork and broth, fresh veggies… it’s true that the best food is found on the streets.

So if you’re ever around Ho Chi Minh City, do look out for street peddlers selling banh mi for a tasty and cheap meal. 🙂

We went souvenir shopping at a local plaza.

There were so many shops selling the same items. Competition must be mad, which is why the saleswomen literally drag you by your shirt to look at their wares. There were lots of snacks, fruits and coffee at cheap prices. To maximise on foreign tourists, they even sell things like Kopi Luwak along with their Viet cofee. (Kopi Luwak is the coffee made from civet cat poop, popular in Indonesia).  I bought more sweets to go.. my bag was bulging by the end of the trip lol. I almost went over my baggage limit on the plane.