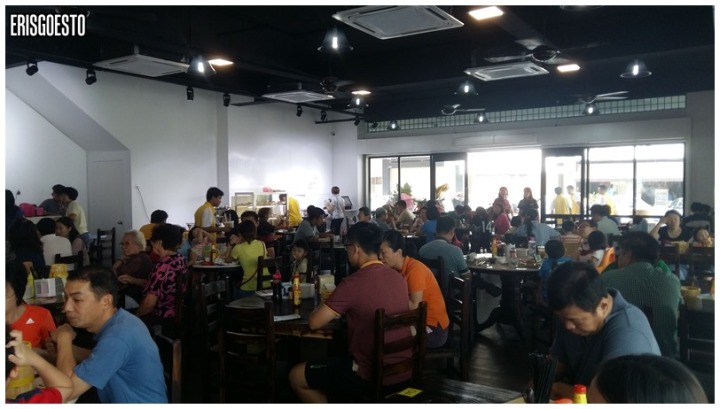 It’s always nice to have dimsum on the weekend, and there is certainly no shortage of dimsum joints in Puchong! My favourite is Taiji Eatery in Bandar Putri Puchong, one of the ‘pioneers’ in the area. So when Moo said she saw that they were closed when she passed by recently, I screamed internally.

Fortunately, it was a false alarm – they’ve merely renovated the space and rebranded themselves as Yuan Le, now boasting an air-conditioned interior and new order system. Instead of picking and choosing from pushcarts and trays, like how the traditional dimsum outlets would do, patrons write their orders on chits and the waiters will punch them into the computer. The staff was clearly trying to get used to this new system because there was a lot of running around, confusion and missed orders. Personally I prefer the old way coz it’s faster and much more convenient. New tech isn’t necessarily better.

Ordered the usual items: siew mai (shrimp and pork dumpling in sweet egg wrapper). Noticed that the price had increased by a whopping 50 cents: so now instead of RM4.50, all of the items are RM5 and above.

Quality wise, the dumplings were still good though.

The last time C and I came, she introduced me to a chicken feet dish braised in spicy sauce. It was really tasty then, so I ordered them again. Wasn’t that good this time around though; the sauce was quite tasteless and the chicken feet less tender. Hargau (crystal skin shrimp dumpling) was nice, with fat pieces of juicy shrimp enveloped within transclucent wrappers.

And last but not least, bacon wrapped around minced pork and shrimp paste, steamed in a light salty broth.

Food quality is still consistent, but I really wished they had kept their prices for just a little while longer.