So my college friend Evelyn was in KL for a job interview recently. The last time we met was last September, so we met up for some catchup and dinner at IOI City Mall, Putrajaya.

After walking around for some time, we finally settled for Franco because they had vegetarian options (Evelyn is vegetarian). Now I can understand how difficult it is for vegetarians to find food, even in a big shopping mall!

Franco serves Japanese-French fusion food. Prices are pretty steep (RM20+ for mains) coz they offer ‘fine casual dining’. Okay, it’s not casual fine dining lol.  They are actually better known for their desserts, such as their thick toasts and parfairs. The savoury menu is pretty limited.

Evelyn’s vegetarian pasta (RM28). While the portion was big and it was loaded with vegetables… RM28? Really? One can have a huge, meaty steak at Steak Shack with RM28. Tastewise, it was decent and felt healthy as it was tossed in olive oil, shimeji mushrooms, slices of cucumber and topped with poached egg, but pricewise, I don’t think it’s worth it to pay that much for vegetables. I could cook this myself for a fraction of the price. 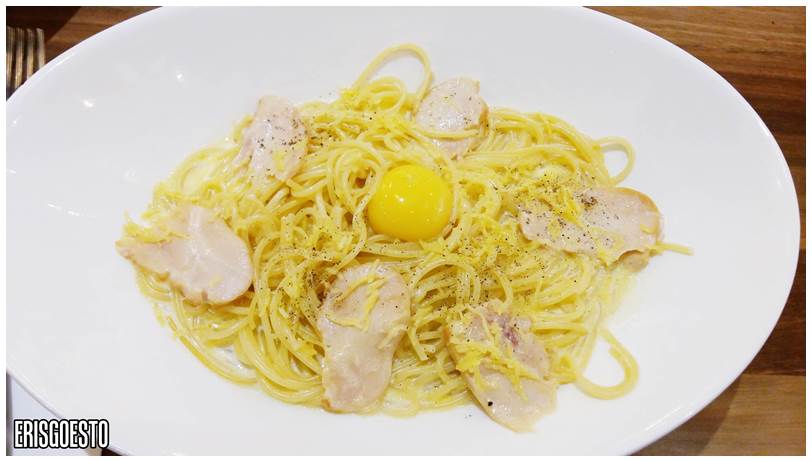 My Carbonara pasta (also RM28) had an egg yolk, slices of chicken ham over a bed of pasta swimming in a light, creamy broth. The sauce was more liquid than solid, but it gave the dish a light feel (usually with cream-based pastas, you get full/tired of it really fast). Again, a lot of pasta, only a few slices of ham – not worth it.

Since the bill was already whopping with just the mains and drink, we decided to skip their famed desserts. Would not come to Franco again for the mains, and only if I had money to splurge.

Second round of drinks – was feeling in the mood for some Thai iced milk tea. I love that stuff. Of course, it’s nothing like the authentic 20baht ones you get from streets in Thailand, but the ones from Cha Tra Mue are good enough.