Since the dawn of time, ghost stories have been a staple of every culture in the world. Call it morbid fascination or a coping mechanism against the unknown… but we seem to like to scare the shit out of ourselves. We listen to tales of creeping, slithering things in the dead of night, even when we know it’ll keep us awake – staring at the ceiling and wishing daylight (or sleep) would come sooner.

I love reading horror – it’s my favourite genre – and I have a big (I say this with pride, haha! :P) collection of books to back it up. Stephen King is my favourite, followed closely by Edgar Allen Poe and H.P.Lovecraft. King, in my opinion, is unrivaled in the way he turns the mundane into the macabre. It’s horror at it’s best when normal, everyday things turn.., well, horrifying.

But up until now, I haven’t come across a Malaysian horror writer. The closest I got to ‘local’ content was Singapore True Ghost Stories, which I loved reading as a kid (I don’t see them in bookstores anymore, for some reason).

Over the last few years, the local writing scene has picked up, thanks to publishers like Fixi Novo. Books by local writers are now much more accessible and displayed with pride on the front shelves, instead of being relegated to backroom storage or a tiny corner of the store.

So I was very curious when I came across Horror Stories by Tunku Halim. The cover, which had a simple design (a pair of eyes against a black background and bold, white letters) had a quote: “One of the most unpleasant books I have ever read”. The back cover called the author ‘Malaysia’s Prince of Darkness’, followed by a list of some 21 short stories. With such testimonials, how could I miss it? So I bought it and immediately plunged myself into the pages. 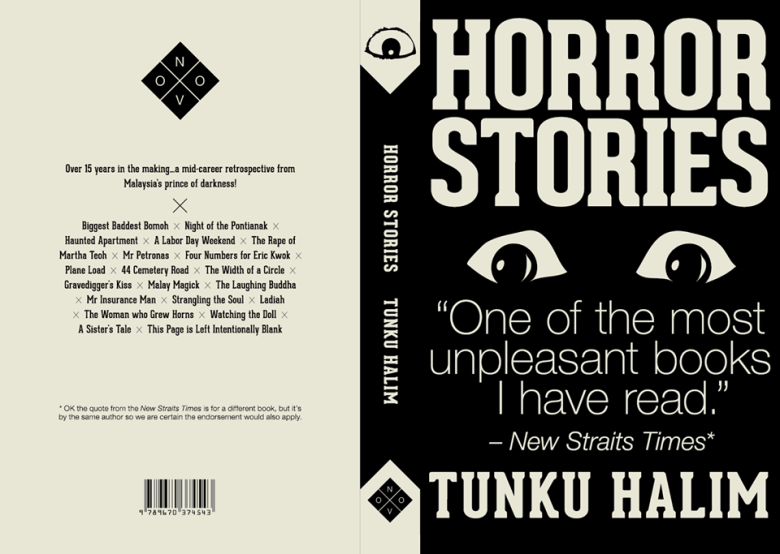 I won’t lie. I was disappointed (Okay, so I’m not a bigshot writer or anything, but you don’t have to be a chef to describe how food tastes like, right?).

There were a few good ones. I enjoyed ‘Plane Load’, which had a nice, oddly humorous twist at the end, as well as ‘Malay Magick’, which was brilliant.

But most of the others, like ‘Gravediggers Kiss’, ‘Haunted Apartment’,’Four Numbers for Eric Kwok’ and ‘Night of the Pontianak’ were simply too cliche; like fried egg splattered across the pavement. Overdone, messy, leaving nothing to the imagination. Too much screaming, too much narrative, too little horror. I could see most of the ‘twists’ coming from a mile away. Night of the Pontianak, in particular, irked me to no end. The story flowed like a B-grade horror film – characters stumble like idiots into bad situations, and are surprised when sht goes down. The descriptions were painful to read. Sample:

“Hair. And face. Flying across the road. Over Julian’s mangled body.

Closer she came. White dress shimmering loosely in the moonlight.

My creative writing teacher once told me that character conversations should never feel like a narrative. In ‘Watching the Doll’, a character literally talks like a story: “The corridor was dark except for a shaft of streetlight shining on the wall.” “Then I saw a dark shadow, jumping noiselessly from the window.” I mean, if I saw some crazy wooden doll trying to break into my apartment, I wouldn’t be describing it that way to someone.

The endings to some stories are abrupt. I understand these are short stories, but I felt like I was left high and dry, like the author rushed to the end because there weren’t enough pages.

I’m sure Tunku Halim is an experienced writer. He has published many books (Horror Stories is a bestseller in Malaysia by the way, making four reprints), written dozens of short stories, and been in the writing business for years. (Meanwhile I slave away at a nine-to-five at a struggling lifestyle magazine, so.) But I was seriously not scared of any of the stories. Not one iota.

There’s a lot of potential for greatness, because Malaysia has loads of culture/history unique to this region. Stuff like mediums, bomoh, orang minyak… they all offer a breath of fresh air to a tired genre.

But here’s what I think.

It’s easy to write horror stories, but it’s hard to be a master.

What I disliked: Cliche – vampires, zombies, rehashed, retold, same old, same old. I mean, these are horror staples, but they don’t have to be ‘creeping’, ‘bloody’, ‘long hair’, ‘screaming’. You get what I mean?