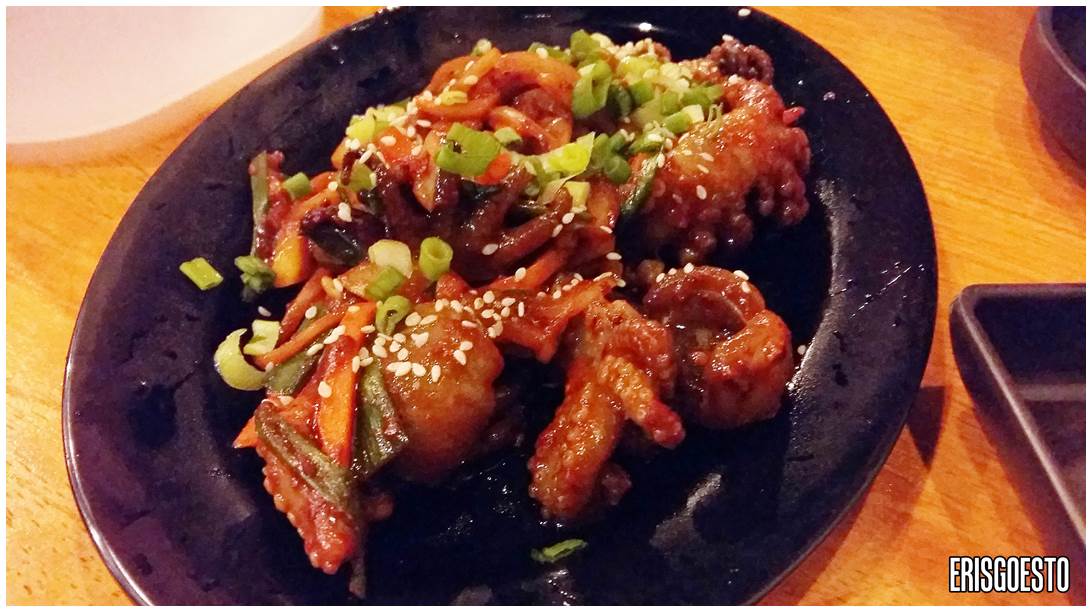 Update: This restaurant is permanently closed.

Had an urge to go swimming over the weekend. Our National Aquatic Center is closed until 2017 (!?) in preparation for the Southeast Asian games. Boo, because that’s the closest public swimming pool to my house. Thankfully C was in the mood, so we went to her apartment at Koi Kinrara. They have an infinity pool that looks over the Puchong skyline. Pool was quiet in the evening and weather was perfect. 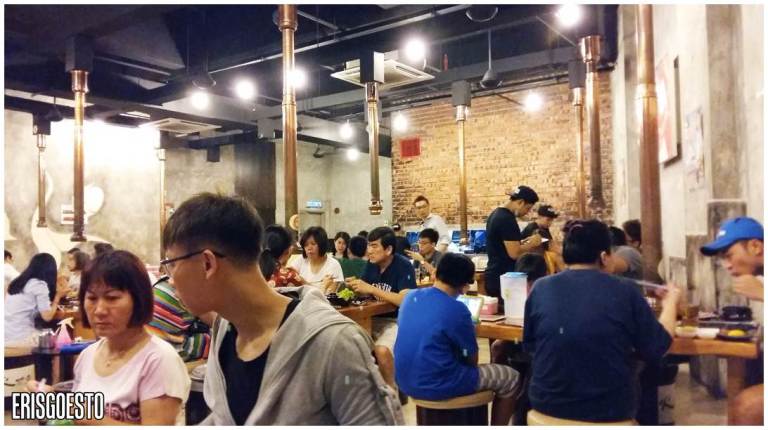 We negated all the calories we burnt from swimming by having dinner at Huo Lu Ai, a Korean BBQ joint in Setiawalk, Puchong. Each table had an exhaust to suck up the smoke, and a grill for cooking. Guests can opt to have the food cooked in the kitchen, or have a server cook them at your table.

Korean music played in the air. The wall was also papered over with posters of Korean boybands. 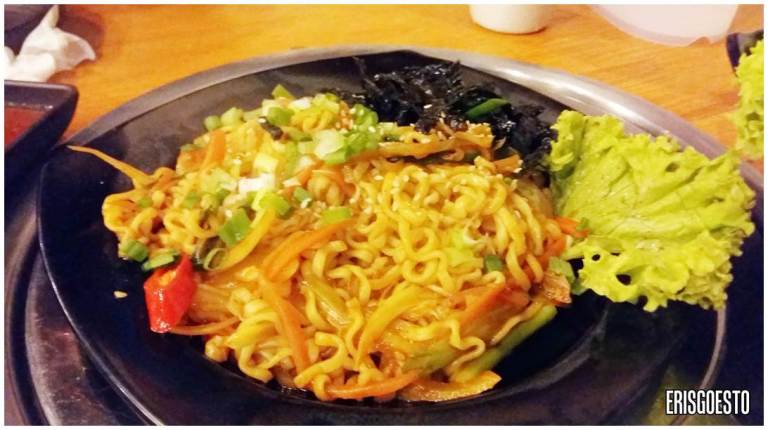 I was in the mood for noodles, so I ordered the Korean Spicy Noodle. I’ve seen the Korean Spicy Noodle Challenge online, so I was worried as to how spicy the dish was gonna turn out…but it was fine. Had to down cold water a couple of times but the spice level was manageable.  Noodles were springy, well-flavoured and cooked with slices of carrot, chilli, onion, spring onion and garnished with a side of nori (seaweed).

Also ordered the Kimchi Pancake. These are best eaten hot. They were not too oily, and I really liked the crispy edges.

We got two grilled dishes, which come served with banchan (side dishes) like pickled radish, stir-fried spinach and potatoes.

And the customary kimchi. This was fresh, well marinated and not too spicy. 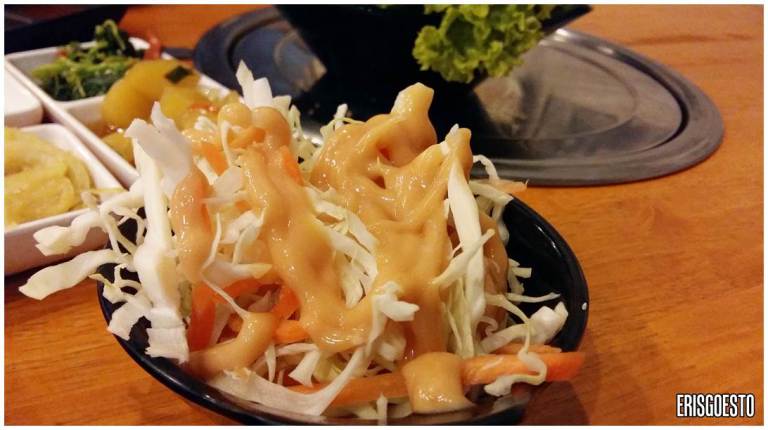 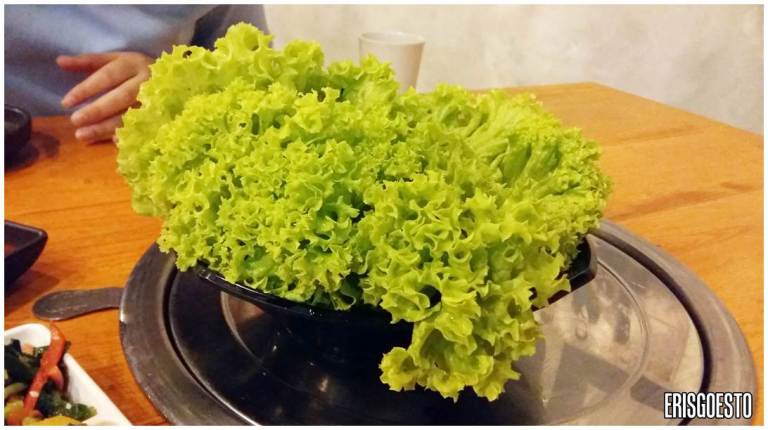 The Chinese style of cuisine (which I grew up with) often broils/stir-fries vegetables, leaving them limp and tasteless unless drenched with sesame oil/soy sauce etc. Which I don’t like. I really prefer fresh, crispy greens. K BBQ serves corral lettuce to go along with the grilled meats. Perfect.

Spicy marinated octopus. The octopi was sizable and well flavoured with gochujang (hot pepper paste – made from red chilli, glutinous rice, fermented soybeans and salt. The taste is similar to the Japanese miso, but spicier.), although slimy and chewy in the middle. 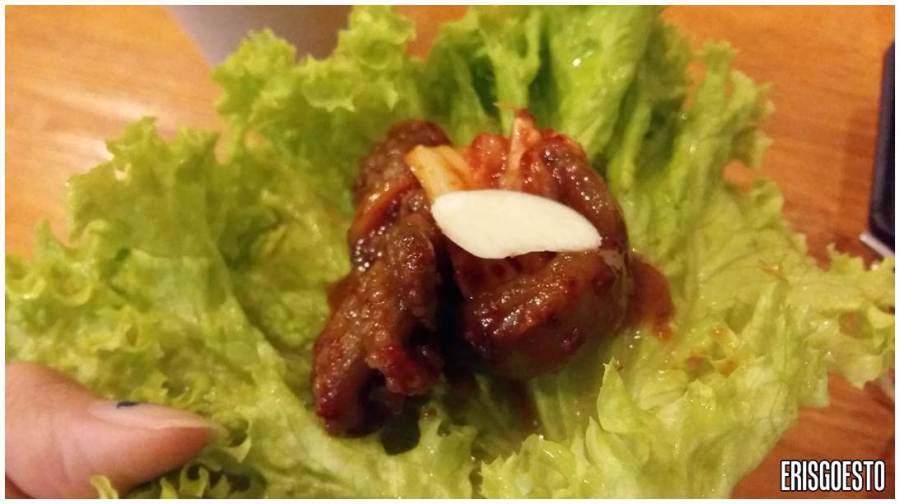 Wrapping a piece of octopi, topped with a piece of garlic and some sesame oil/more gochujang paste (I can’t get enough of it!) before popping the entire thing in my mouth. Divine

Our second grilled dish was pork belly. It was kinda oily, but tasty. Good balance of lean and fat. Went the same way as the octopi – dip in sesame/gochujang, wrapped in lettuce leaf and nom.

The bill came up to RM80, which is reasonable since we ordered so many dishes. Good place for Korean food.

PS: Ladies, did I mention that the servers here are all super cute? 😛

Went over to have some rice wine at C’s house and to play with Genie. She is so light and small.