So my net’s finally back, having been down since Thursday. It was a long ass holiday in Malaysia for the Hari Raya celebrations, so nobody was around to fix it.

Being online is a big part of my life. I go online to write and blog, so not being able to do that for six days really sucked. On the bright side, I had to come out of my house-cave and actually do stuff like normal people.

Anyway, I’m just glad the line has been restored. Here’s what I’ve been up to the last couple of days.

Went for Y’s open house at her uncle’s home at a resort in Penchala. It’s a bungalow on a hill surrounded by jungle, with a chalet and a cooking school just next to it.

An open house (rumah terbuka) is synonymous with Malaysian culture, and non-Malaysians should definitely go for one if you’re ever in town visiting during the festivals! Anyone and everyone is free to come and eat at the host’s house, and a buffet line of scrumptious food is usually prepared for the guest’s enjoyment while they mingle.

I was here last year with my colleagues, and the food was awesome this time around as well. The mutton curry prepared by her uncle’s maids was ah-mazing – literally fall off the bone tender. The chicken curry and rendang was good as well. I left completely stuffed. All that spicy food meant I spent most of the next day on the toilet, but man it was worth it.

Monday night and nothing to do because my net still wasn’t back on… so S and I went out for supper.

We went to a newly opened cafe called the Walnut Cafe at PFCC Puchong. The place has a nice, cozy feel to it. Ordered lemongrass white tea, which came in a cute wooden barrel with a tap, just like beer tower.

Feeling peckish, so we had a snack plate to share. Onion rings, chicken nuggets, spring rolls and samosa. The bill came up to RM44 for the two of us .__. Quite pricey, but the snacks and drinks were pretty good.

Chicken karaage set with rice and miso soup. Tasty, but small meat portion. Not worth it to pay RM20++. 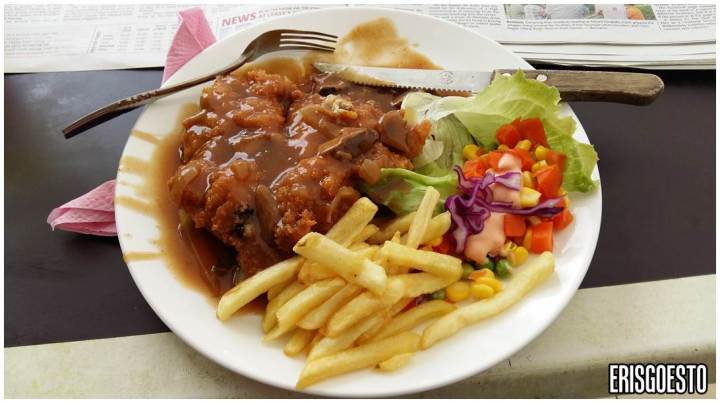 Had Jap food again with my mum after watching a film, at Sushi Tei Setiawalk Puchong. I come here quite often because it’s near, the food is pretty good and there aren’t too many Japanese restaurants to choose from anyway. Had chicken karaage curry rice. Fluffy white rice, crispy chicken which is juicy on the inside and warm, savoury curry? Great for a rainy afternoon.The downside is that the potatoes and carrots were under cooked coz they were still hard to bite.

Mum had chicken gyoza, which she said was ‘okay’. But then again, she says that most food is ‘okay’ anyway, lol. 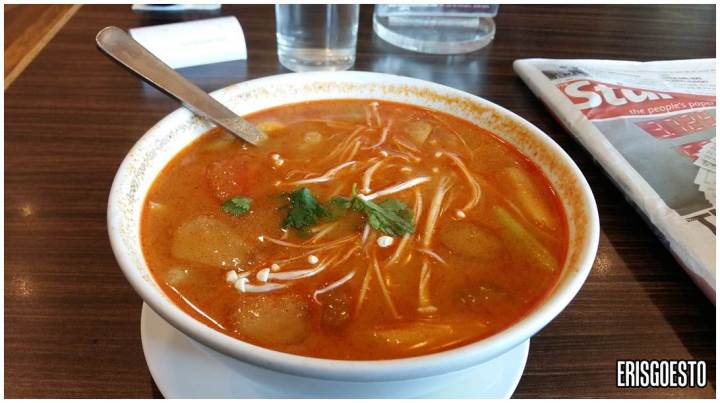 Tomyam seafood soup @ Black Canyon, a Thai-Western fusion resto in Alamanda Putrajaya. Soup was good for rice, but didn’t have alot of seafood.

Now that the net’s back, I can finally blog properly again! Stay tuned.